Zimbabweans without settled status in the UK have been alarmed by a report in a daily newspaper here, the Independent, that Britain is working with officials from the Zimbabwe Embassy to send them back home, where they say they fear persecution. 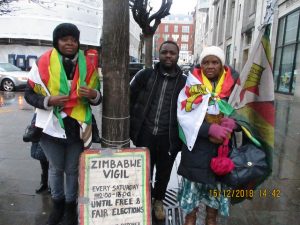 The Independent says that at least seven Zimbabweans, some of whom have lived in Britain for more than a decade, were last week ordered to attend meetings at a Home Office (ministry of internal affairs) building in Sheffield where they were questioned by an Embassy official. The same process was said to have taken place in other parts of the country. (see: https://www.independent.co.uk/news/uk/home-news/asylum-seekers-home-office-zimbabwe-immigration-embassy-political-persecution-africa-a8675571.html).

The newspaper interviewed Marian Machekanyanga who said she had been a trade union activist and had fled to the UK 16 years ago. She said she was invited to attend a Home Office meeting and was surprised when she saw a Zimbabwean official in the room. ‘The man had my file on the table. He started speaking to me in my native language. I asked him if I could call my solicitor and he said ‘no’. He said the Home Office had asked him to interview us. I was really frightened. Why is the Home Office giving my details to the government I ran away from? I know they will still be after me. Anyone who has claimed asylum in England is an enemy to the government.’

Another failed asylum seeker, who said he came to the UK on a student visa in 2003, and has since posted anti-government blogs, said he was highly suspicious when he saw a Zimbabwean official. ‘He was asking for more information about myself to confirm my identity. He wanted to know about my parents and relatives in Zimbabwe. I refused to give him information about myself. I was afraid. If they confirmed it was me, what would they do with that information? He wasn’t even concerned about whether I was an asylum seeker.’

The man, whose asylum claim had been rejected by the Home Office, said he would ‘surely be a target’ if he were removed. ‘I know why they want to help the UK remove asylum seekers. They want to legitimise the current government and be readmitted to the Commonwealth and get foreign investment. They’ve been approached by the British government and have promised to help them’, he said.

The UK’s relations with Zimbabwe have improved since the overthrow of Mugabe and the Independent says the latest British move is part of an agreement with Zimbabwe under which the UK would repatriate 2.500 people.

The Vigil understands it is British policy when seeking to deport failed asylum seekers to engage their country of origin to ensure they are not refused entry. Some asylum seekers either don’t have or have destroyed their identity documents and some countries routinely refuse to take them back.

Social media has been alive with scare stories following the Independent’s article so the Vigil approached the Home Office for more information. All they would offer us was a one sentence statement which had already appeared in the Independent: ‘A routine redocumentation interview event took place in Sheffield on Tuesday 4 December’.

We think this is inadequate and that the Home Office should be more open about the matter (see: https://www.facebook.com/taffi.nyawanza/posts/2365431770151213).

In Zimbabwe, the Secretary for Information, Nick Mangwana, who used to lead Zanu PF in the UK, said Harare welcomed back its sons and daughters regardless of the circumstances under which they left the country (see: https://www.herald.co.zw/feel-free-to-come-home-diasporans-told/).

The Vigil thinks it would be a good idea if Zimbabwe offered further reassurances about the treatment of people returned to the country and suggest that the UK’s massive foreign aid budget could be used to support some independent agency – perhaps the International Organisation for Migration – to monitor their treatment.

The Vigil’s own policy is clear: we do not accept the legitimacy of the Mnangagwa government and are not sure that it is safe to send back known anti-government activists such as the people who campaign with us week after week, year after year in rain and snow. But we can only speak for them.