HARARE Magistrate Gloria Takundwa on Tuesday 11 December 2018 said she will approach the High Court to seek guidance on how to handle trial proceedings for human rights lawyer Tendai Biti after it emerged that a member of the National Prosecuting Authority (NPA) had allegedly tried to interfere with trial proceedings. 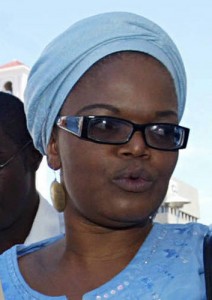 Biti’s lawyer Beatrice Mtetwa of Zimbabwe Lawyers for Human Rights told Magistrate Takundwa that she had been made aware of a message sent by Reza of the NPA, who was removed as lead prosecutor last month after the court found him unsuitable to prosecute the MDC Alliance Vice-Chairperson ostensibly to Thabani Mpofu, the head of the Special Anti-Corruption Unit in the Office of the President and Cabinet, criticising the Magistrate’s ruling allowing media practitioners to live stream trial proceedings.

The message which was shown in court reads; “Cde Mpofu, it’s Reza, how are you. Another strange ruling by the magistrate trying Tendai Biti. They applied for live streaming of the case, with cameras and journalists in court and proceedings beamed all over the world. She has just agreed to that without authority of her boss the Chief Justice. She is either very brave or very stupid or both kkkkkk.”
Mtetwa charged that Reza’s conduct and message is contemptuous of the ongoing court proceedings and
should be investigated by Zimbabwe Republic Police officers and also insinuates that judicial officers lack independence as they should consult the Chief Justice before passing any decisions.

The State represented by Jonathan Murombedzi of the NPA told Magistrate Takundwa that an enquiry
should be set up to ascertain if it was Reza who indeed sent the message intended for Mpofu and
determine whether it was contemptuous.

Magistrate Takundwa then postponed Biti’s trial to 21 January 2019 to allow herself to get guidance from the High Court.

Meanwhile, Mtetwa asked the court to relax Biti’s bail conditions so that he retrieves his passport, which is being held by the Clerk of Court at Harare Magistrates Court, Biti, who is on trial on charges of contravening section 66A(1)(a) and 66A(1)(b) of the Electoral Act was arrested on 8 August 2018 after he allegedly unlawfully and unofficially announced the 30 July 2018 presidential election results. He pleaded not guilty to the charges when his trial commenced on Monday 10 December 2018.