With travellers making their way to Zimbabwe a day before Christmas, the Department of Home Affairs says the congestion at the Beit Bridge border post is currently being resolved. 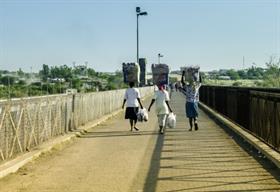 The department said that the border post in Limpopo, which borders with Zimbabwe, has experienced delays on the South African side.

“The officials of the department have been advised by their counterparts in Zimbabwe that there are some delays in processing documents for vehicles and people moving through the border on their side, which is causing congestion on our side,” said spokesperson David Hlabane in a statement.

According to Hlabane, the situation is improving and the two teams are in constant contact regarding measures to deal with the congestion.

“Travellers are requested to exercise calm and to be vigilant and cautious. The department further appeals to travellers to carry their documents when they travel.

“The department has dispatched its senior managers to Beit Bridge and other ports of entry to monitor the flow of traffic through the borders and to facilitate solutions where challenges arise,” he said.

News24 previously reported that the home affairs department had brought in an extra 425 staffers to assist at border posts and airports during the festive season.

This was also to have applied to round-the-clock services at the bigger borders like Beit Bridge, Lebombo and Oshoek.

The Lebombo border post in Mpumalanga was busy throughout Monday, but had been manageable, according to Mpumalanga Department of Safety, Security and Liaison spokespersosn Moeti Mmusi.

“The traffic flw is fairly manageable. It’s nothing compared to what it was on Saturday and Sunday when it was gridlocked,” he said.

Mmusi added that the queues heading to Mozambique, and the those coming into South Africa, were moving.

Meanwhile, traffic in Johannesburg was quieter, with most people having left for their Christmas  destinations over the weekend.

Johannesburg Metro Police Department spokesperson Wayne Minnaar said that the roads were very quiet, but that officers had been deployed on all highways and major roads, and would continue to monitor the traffic.

“National roads  [in the Western Cape] are still very busy, and will stay that way until later this afternoon,” said Africa.

Africa was also happy to report that, by lunch time on Monday, no major accidents had been recorded.

Road Traffic Management Corporation spokesperson Simon Zwane said that most major highways throughout the country were a lot quieter since the weekend, but that there was still a last-minute rush to border posts, as foreign nationals headed to their home countries for Christmas.