George Bush senior died this morning. I met him once, when as Vice President he visited Harare and I was invited to a reception for him. My other indelible memory of the man was watching the GOP Convention where he was confirmed as the Presidential candidate for the Republicans – going on to win the election and lead his country through perhaps one of the most turbulent periods of global history. 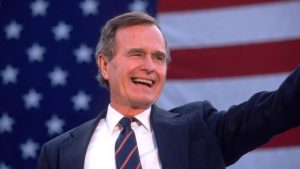 The whole family was on stage and he was standing slightly to one side with a small boy at his side, holding his hand. The camera zoomed in on him as the crowd roared his arrival on stage to acknowledge becoming their candidate. In doing so I got a good look at the little boy, he was mongoloid. Hair slicked back and in a suit with black shoes, he was watching the crowd with more curiosity than awe. He turned to his Grandfather, who was one of the most powerful figures on the world stage and said something to him, George leaned down to hear him better and smiled at him.

If I had been in that hall and a Republicans, I was sold. It was not so much what George did, it was the attitude of that boy. There was no sense of him being any different or inferior, no sense that he should not be there, no sense that this tall man standing next to him was anything other than his Grandfather. In a family that is leadership – real leadership. That he raised his family while being so busy with his public and business life, never accused of any misdemeanours, no scandal, married to one wife for over 70 years, his progeny all going on to make their mark in life, that is leadership in the family, something that is missing in so many families today.

But more than real leadership of an exemplary manner in the family, George Bush was the consummate socially caring Conservative politician. A decent man who cared for people from all walks of life. His Presidency was characterised by something that is missing today in the USA – a vision of America in the world, caring, compassionate but supremely powerful. He knew how to wield power and understood, better than many the limits of power and when to step back.

A year after he assumed the Presidency – the Berlin Wall collapsed and the Soviet Empire disintegrated. Instead of gloating over these events and the success of Democracy and individual freedom over Marxist authoritarianism, he reached out and supported the individual countries as they struggled to find their feet in a turbulent and unstable Europe. He built up a friendship with the leaders of Russia, he moved swiftly to support the efforts of the German Government to integrate their fractured society and economy. No grand gestures, just quiet diplomacy and support. Largely because of his leadership and the selective use of power, the transition from the Soviet era to something else was much less turbulent than might have been expected. I often wonder how many of us appreciate just how dangerous those days were?

Almost at the same time – April 1989 we had the uprising in China exemplified by Tiananmen Square. Hundreds of thousands of young people swarmed over the most famous square in China, demanding change. It was over a decade since Mao had died and China was still finding its way. Economic liberalisation had not been followed by political freedoms. The rising tide of prosperity and an increasingly educated and mobile new generation was asking why was the Communist Party still supreme in every aspect of their lives?

Legitimate question, wrong time. President Bush watched these events from Washington, a world away and recognised the dilemma of the Chinese leadership. Alone among world leaders he recognised that if the uprising was encouraged and funded it would lead to chaos in the largest country in the world in population terms. He recognised the wisdom of the Chinese leadership in prioritising the economy over politics and wanting to gradually allow greater people participation in decision making. He quietly signalled his support to the Chinese leadership achieving two things – an era of cooperation with the USA and the maintenance of a more open society to the West. I breathed a sigh of relief and this event further strengthened my admiration for the President as one of the truly great leaders of our time.

Then the War over Kuwait. The Iraq leadership decided that the wealth of Kuwait was just too much of a temptation for one of the great power brokers in the region. They invaded the tiny State where they pump wealth out of the ground at a dollar a barrel and sell at a 100 times this on the world market. If ever there was a money machine, this was it. Kuwait was no pansy, but when the armed forces of Iraq invaded it was all over. I remember asking a Danish friend of mine what they would do if their neighbour, the Soviet Union invaded? He said they would put up “welcome” signs in Russian!

This contest was much the same. The political and moral options were simple, but who was going to do it. The United States stepped up to the podium and said the invasion was a gross violation of international law and had to be reversed. No other State had the resources. The President again showed another side of his character. A former fighter pilot in the US Navy, he appreciated that when you decide to go to war, you have to apply adequate force. The result, a contest in which the American armed forces in three months, simple crushed the Iraq army. They demonstrated the capacity of technology and destructive targeted power in a way that had not been seen before or since.

But it did not stop there, he knew the limits of military power and once he had driven the Iraq army out of Kuwait and reinstalled the leadership and control of that country, he instructed his forces to stop operations and allowed what was left of a defeated army, to limp back to their homes. Many hawks in his own Party howled for blood and argued that they should have finished the job by taking the fight to the leadership of Iraq and the capital city. Bush stood firm, they had done their job, the US armed forces went home earning the massive respect of every Arab State and the lifetime gratitude of the Kuwait leadership.

Statecraft is not easy or simple, leadership at times like these requires massive wisdom and courage. President Bush exhibited all of these and left behind him a more decent, stable and progressive world. When his term of office came to an end and he had to stand again, he did so, but for me watching his campaign and the tide of time, I thought that this man did not want a second term. He wanted to go home and spend the rest of his days with friends and family. Like Mandela he stepped back from power and authority and retreated with his memories and legacy.

This event – the passing of George H Bush into eternity – brings to my mind the importance of leadership in the modern world. We have leaders – Trump in the USA, May in the UK, Merkel in Germany, Mnangagwa here. They are all struggling with local and global problems and must make decisions every day. I have no doubt that Trump will not leave a legacy that anyone will be proud of – the whole world will celebrate his passing; his own family will certainly have mixed feelings. Mrs May is trying to achieve the impossible – withdrawal from the EU without damage to the British economy and its people. Mrs Merkel has stayed on too long after a great period of leading Germany as the heart of Europe and restoring Berlin to the heart and soul of Germany.

Then there is tiny Zimbabwe, Mugabe is history, celebrated in the passing and without a legacy except that he was the man who brought us independence in 1980 and gave all Zimbabweans freedom and opportunity. But his leadership was disastrous, especially after Sally died – somehow she was a guide and mentor. Millions have died an early death under his leadership, further millions have fled as economic and political refugees, we are poorer and less educated and most see little prospect of a better future. We have been failed by our post-independence leadership, the challenge is, can our new leadership rise to the occasion and do what is required to unlock our future with all its potential.