For advocacy in natural resource and governance with youth and women. 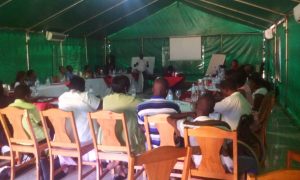 Participants at the capacity building training for advocacy in natural resource governance.

Masvingo Centre for Research and Community Development (MACRAD), conducted a capacity building training for advocacy in natural resource governance with youth and women leaders in Chiredzi, Chivi and Mwenezi districts focusing on the Tugwi-Mukosi Dam formerly known as Tokwe-Mukosi Dam and its economic prospects for local people.

30 people attend the training, 15 male and 15 women. Participants from Chivi District highlighted that the construction of Tugwi-Mkosi was meant to boost the economy of Masvingo Province and Chivi District in particular by providing water for irrigation and power among other key economic activities. The project cost 260 million USD, multitudes of families had to be relocated for the construction project however due to poor and haphazard project planning this was not done before the dam was constructed thus putting the lives of villagers in danger.

In 2014 poor villagers were forcibly evicted by the government from their homes following heavy flooding triggered by large volumes of water that escaped from the incomplete of the project. The people relocated to Chingwizi area were given 1-hectare plots of land which is not good enough for farming and the area lacks proper sanitation facilities.

More so, after the completion of the dam in 2017 a development master plan was launched which pointed out that there were 29000 hectares of arable land surrounding the dam and the Dam had the capacity to accommodate a mini –hydro power station which generates about 15 Megawatts and fisheries among many economic activities. Naturally the first people expected to benefit from these economic activities listed in the Master plan were the people affected by relocation yet most of them are yet to receive their compensation from government.

The participants emphasized that Masvingo State Minister announced that 10 000 hectares will be given to Zanu-PF leadership and this was evidenced in Newsday of 13th September 2018 and Masvingo Development Trust was to be given 15 000 hectares and this leaves only 4000 hectors for the rest of the people. The people from Chivi district also alluded that the Masvingo Development Trust is wholly owned by members from the ruling party Zanu-PF.

In a 2014 research conducted by Dorren Zhou of the Midlands State University it was noted that civil society organizations failed to provide adequate response and relief services to the victims of Tugwi-Mkosi flood disasters. Gaps identified in the response stage included lack of capacity in advocacy by Community Based Organisations  as well as lack of capacity to pursue litigation for compensation of flood victims. In a survey carried by Masvingo Centre for Research and Development (MACRAD), Chiredzi, Chivi and Mwenezi district are the most districts in Masvingo affected by the construction of Tugwi-Mkosi but there are yet to benefit hence the need to capacitate local communities on advocacy in the field of natural resource advocacy.