Chimoio (Mozambique), (AIM) – The government of the central Mozambican province of Manica, and its counterpart in the Zimbabwean province of Manicaland are studying appropriate mechanisms to fight illegal gold mining, and the subsequent pollution of rivers in both countries. 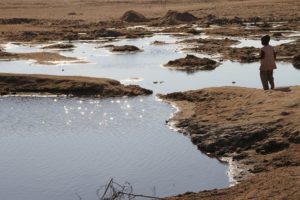 The illegal miners often use mercury which polluters the rivers, kills wildlife, and endangers the health of people who rely on the rivers for drinking water.

The Manica provincial director of mineral resources, Silva Manuel, speaking to reporters in the provincial capital, Chimoio, said the main purpose of the discussions with the Manicaland authorities is to find mechanisms which can help reduce or even eliminate illegal mining, which is at its worst in areas along the Mozambique/Zimbabwe border.

“Many rivers rise in Zimbabwe and it’s there where most of the illegal mining happens. Here we receive water that is already murky”, said Manuel. He accused the Zimbabwean miners of disregarding the recommended techniques for extracting alluvial gold.

“Work is under way to bring the two provinces together and see how we can eliminate this practice”, he added.

“It’s high time that we tried to impose some order, so that we do not continue in this situation”, said Manuel. “Many people think that the water becomes murky inside Mozambique. That’s not true. The water is already dirty when it comes into our country. This shows that the two governments must work together”.

The largest rivers that cross Manica province are the Pungue and the Lucite. But the water in these two rivers is murky and polluted at all times of the year. Thousands of households used to live along the river banks, so that they could use the waters to irrigate their fields. But because of the pollution, many farmers are now abandoning the area, and looking for somewhere with clearer water where they can produce their crops.

“On the banks of these rivers, almost nobody is producing”, said Manuel. “The crops do not develop, and we also have a problem with pasture. The households prefer to go elsewhere, where conditions are better. They take everything with them, including their livestock”.

“We are greatly worried by this situation”, he added. “We want to see if we can succeed in minimising the problem”.