Clean coal is one thing, but soap from soot — known as sadza in Polish — brought laughs to a UN meeting in Poland. 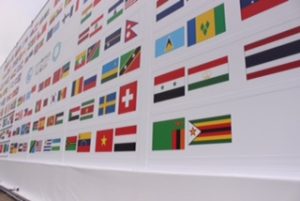 A wall of flags outside the summit at Katowice, including Zimbabwe.

Katowice – It was never going to be easy holding a United Nations climate-change meeting in a country that gets 80 per cent of its energy from coal and is planning more of the same.

The 24th Conference of Parties (COP24) to the Paris Accord on Climate Change opened in the southern Polish city of Katowice on Monday with confusion from the start. A map of pavilions showed one for the United States, but when visitors went to the spot it was empty. The US negotiating team had no idea why their country was even listed among the displays. President Trump is in the process of withdrawing from the Accord.

Nigeria, Benin and Congo Brazzaville did have stands, but for much of the time there were no staff to run them.

French leader Emmanuel Macron was due here, but couldn’t leave Paris because of violent protest against his plan to increase a tax on fossil fuels. On Wednesday he agreed to scrap the hike, but a spokesman for the demonstrators said it was, “too little too late,” and the riots look set to continue.

The aim of COP24 is to set goals by which the almost 200 nations will reduce pollution in order to halt a rise in temperature across the planet. Chief among these, according to the UN, is a limit on oil, gas and especially coal.

But to the horror of green protestors, the president of Poland arrived to sign a “solidarity accord” with miners, confirming there would be no end to Polish coal any time soon. 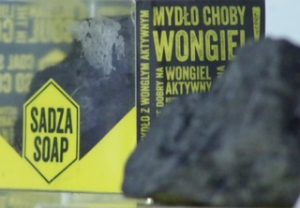 Most African countries have a presence here, some with teams larger than wealthy nations.

John Owusu is a retired engineer originally from Ghana, but for 50 years he has worked across all regions of Africa.

“There’s a crisis of energy on our continent,” he said “More than 600 million people have no electricity but we have African countries with huge delegations, all staying in top hotels, and for what?”

He said a key to saving the environment was to stop the loss of forest across Asia and Africa. “Where people have no other way to cook or heat their homes, they will use firewood,” he said. “We need electricity for Africa and we need it now. That’s where the money should be spent, not on flying to summits.”

The main US team will arrive on Monday to promote an alliance between countries who could share technology on how to use coal without putting off harmful emissions. Australia, the US, India and South Africa are considered world leaders in the science.

Indian environment minister Dr Harsh Vardhan, a former ear, nose and throat surgeon said his work as a doctor left him “in no doubt” on the need for clean air.

But he also defended his country’s coal program, saying ultra-supercritical systems had changed the way it was used, reducing emissions to levels that allowed India to meet its obligations under the Paris deal.

And, he said, India “stands ready to share clean technology of all kinds,” with the world. “This is a battle for the planet, not for any one country,” he said.

Zimbabwe is represented by minister for agriculture Perence Shiri was was previously banned from entering the European Union under sanctions against the former regime of Robert Mugabe. The official UN list shows 86 people in the Zimbabwe delegation.

The World Bank announced it would spend $200bn over the next five years to help countries limit climate change though it will not fund projects using fossil fuel, a policy opposed by the US which is the banks largest donor.

But there was a light moment for the Zimbabwe delegation when they passed by the Polish stand to find a display marked, “Sadza Soap.”

In Zimbabwe’s Shona language, sadza is a stiff maize-meal porridge and the national dish. In Polish, it means soot or powdered coal.

The soap was displayed in glass cases surrounded by Polish coal.

Countries in the region are using oil, coal and nuclear power to lessen their dependence on Russian gas in wake of Moscow’s annexation of Crimea and eastern Ukraine. With winter temperatures falling below -20ºC, there is a fear President Vladimir Putin could freeze his neighbours into submission, simply by turning off the gas.

COP 24 will wrap up next week, but John Owusu said it reminded him of the Organisation of Petroleum Exporting Countries or OPEC.

“OPEC ministers come together and pledge to reduce output in order to maintain a high price of oil. Then they go home and pump as much as they like.

“Sadly it’s the same thing here. Everyone wants cheap electricity and they’ll make it with whatever works best.”

He said at least the Polish president had been honest. “Wind and solar are growing, but coal will continue whether we like it or not.”