The recent pronouncements by Zanu-PF war veterans to the effect of raising the minimum age of presidential candidates does not only raise every Zimbabwean’s eyebrows but it is a real attack on our fledglingly democracy. 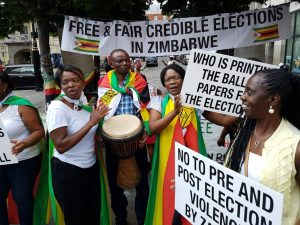 This attack is aimed at derailing and subverting the newly introduced constitution of Zimbabwe. War veterans perceive themselves as Zanu Pf’s mad dogs and regrettably have been barking against anyone or anything threatening Mugabe’s establishment during the past thirty-eight years. Now that Mugabe is gone, they have become Mnangagwa’s new lap dogs and are being used or abused to target Nelson Chamisa who has since remained an imposing challenge to the presidency of Emmerson Mnangagwa.

Nelson Chamisa has charmed millions of Zimbabweans in a short space of six months when he campaigned as MDC’s presidential candidate in the recent general election. Contrast that to Mnangagwa who has been a senior minister and or vice president of Zimbabwe for the past four decades and yet even today half of Zimbabweans still do not know him or seem not to care about listening to Mnangagwa’s drowning voice. Chamisa comes across as a young eloquent, energetic, organised visionary who can take Zimbabwe to future greater heights. On the contrary Mnangagwa’s passiveness, lack of vision and disconnection with young people gives rise to the current despondency which leaves many citizens uninspired. By trying to raise the minimum presidential age and consequently eliminating Nelson Chamisa’s candidacy, the war veterans are inadvertently exposing the fact that Nelson Chamisa’s meritorious rise is unstoppable.

Zimbabweans must come together and safeguard our newly found constitutional liberties as enshrined in the constitution of Zimbabwe. The days of tinkering with people’s fundamental freedoms are over. While Zanu Pf continues to use and abuse unacquainted war veterans, the people of Zimbabwe should not stand and watch while our constitution is being stripped of essential liberties. The new constitution should empower citizens and enlighten them lest under Zanu-Pf tyranny we are being kept in perpetual ignorance and poverty, “Le secret de la liberté est d&#39;éclairer les hommes, comme celui de la tyrannie est de les retenir dans l&#39;ignorance”, Maximilen
Robespierre.