ZIMBABWE Lawyers for Human Rights (ZLHR) has petitioned the High Court seeking an order to restore occupation of land to more than 40 families and 136 children, who were forcibly evicted from a sacred heritage site last week by armed police officers. 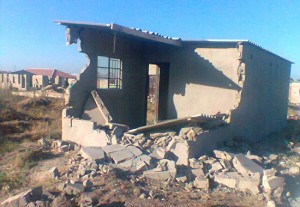 46 adults and 136 children were left homeless on Friday 14 December 2018 after they were forcibly evicted without a court order from Nharira Hills located at Somerby just outside Harare by Zimbabwe Republic Police (ZRP) members in violation of provisions of Section 74 of the Constitution by armed ZRP members, who damaged their houses using crowbars, threw their possessions out in the open, and burnt a thatched house, which held traditional relics of the community and over $2 000 in cash which had been saved for traditional offerings.

This left the evictees to sleep out in the open subject to the elements in the rainy season, as they have
nowhere else to go with their families’ health set to deteriorate as they continue to sleep out in the open.
In an urgent chamber application filed in the High Court, Fiona Iliff of ZLHR argued that the eviction of the Nharira community was illegal, unlawful and violated their right to freedom from arbitrary eviction enshrined in section 74 of the Constitution, their right to dignity and not to be subjected to inhuman and degrading treatment in terms of Sections 51 and 53 of the Constitution, their right to the property, which has been or is likely to be destroyed or damaged contrary to Section 71 of the Constitution and their rights to be consulted prior to the eviction in terms of Section 68 of the Constitution and the Administrative Justice Act. The human rights lawyer argued that the evictees’ traditional rights in terms of sections 3(1)(d); 3(2)(i)(i), 16(1), 16(2)), 33; 56 and 63(b) of the Constitution, Articles 19, 20, 21 and 22 of the African Charter on Human and Peoples’ Rights and the United Nations Declaration on the Rights of Indigenous Peoples (61/295) were violated.

Iliff argued that the evicted members of the Nharira community were not issued with an eviction order in their own names as ZRP members and the Deputy Sheriff purportedly carried out the eviction in terms of a writ of ejectment against four people only identified as Mr Jumbe, Mr Goredema, Mr Madzongo and Mr Chikoto, who are not known by evicted members of the Nharira community and they are not claiming occupation of Nharira Hills through the four people but in their own right.

Iliff wants the High Court to order HFM Marketing to allow the 46 adults and 136 children, who were evicted from Nharira Hils to return to peaceful occupation of the land forthwith and to stop the quarry mining company, its agents, employees and anyone working on HFM Marketing’s instructions to be interdicted from disturbing the peaceful enjoyment, possession and use of the land which they occupied prior to the eviction.

The matter is yet to be set down for hearing in the High Court.