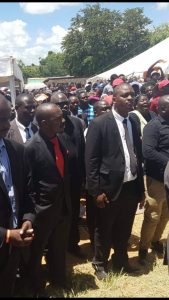 Not only did they block President Chamisa but also Dancehall superstar Wallace Chirimuko popularly known as Winky Dee.

These acts are not only a show of desperation and disrespect but are taboo.

That a stranger can come to a neighbor’s funeral and then be the self appointed clearance guard who decides who must pay last respects is unheard of especially in Zimbabwean society.

Sowing division at a life of a unifier is flummoxing.

The lies and injustice in return for law abiding and peace loving conduct is contempt of the highest order.

The MDC takes this opportunity to thank the people of Zimbabwe who showed utmost respect to the late icon Dr Oliver Mtukudzi, a man who earned every drop of the waters of respect Zimbabweans and the globe continue to pour.

We also express our gratitude to the family who embraced everyone who so wished to pay condolence and pay respect to the late icon despite race or creed.