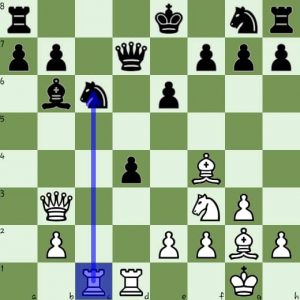 He was tied for the same position with another International Master Providence Oatlhotse of Botswana who was pipped by bucholtz but also with 7 points. Gillian Bwalya had 6 points in the final round pairing when he met Vitalis Mapuranga of Zimbabwe and he won a pulsating game which was the most important point for the day as well. IM Bwalya had drawn against Candidate Master Spencer Masango of Zimbabwe and his compatriot Kabwe Timothy.

Meanwhile, International Master Providence Oatlhotse of Botswana survived a scare against Elisha Thabo of Zimbabwe as he defended well in a position which was almost torn apart. The tactical player had to sacrifice a knight on h7 to salvage the game which he managed and eventually won the pulsating game which left onlookers amazed by the way the International Master defended an almost lost and hopeless position. The leader of the tourney getting in the final round CM Spencer Masango’s fine run in the chess tournament came to a halt in the final round as he was pitted against the “self-made IM” International Master Providence Oatlhotse who made no mistake against the cool player in the final round winning a game in which Masango only needed half a point to be the winner of the Open section which had a record one hundred and fifty players taking part in this tournament.

The game against Providence ensured that our Candidate Master Spencer Masango finish third with 6.5 points half a point behind the eventual winners. Kabwe ‘Komodo” Timothy, Maikokera Walter and Mugove Muririma were all tied on third place with 6.5 points out of the 8 games which were played. Maikokera Walter was the best performer among the average players as he performed much better than his fide rating which is 1709. He defeated Tapiwa Jele of Nkulumane Chess club of Bulawayo whose rating is 2102. He played another pulsating game in the final round when he defeated Kaoma Michael whose rating is also 2156. The game was full of tactical manoeuvres. Mayimbo Clement of Zambia, Chipfurutse Alois, Mapuranga Vitalis, Mwadzura Roy, Godwin Phiri, Maketo Nyembe of Zambia, Magazeni Shingai, and  Mujuru Wayne all finished with 6 points to complete the top ten winners of the tournament. Chipfurutse Alois surprised some highly rated players Kudakwashe Sibanda and Elisha Thabo whom he defeated in a pulsating fashion.

The games went to end game and this showed that the young man’s game is improving. He became the giant slayer. Zimbowa Kudakwashe missed a winning combination in the final round against Candidate Master Godwin Phiri of Zambia who had been gained some material in the middle game. Matahwa Fungai who is now based in Swaziland surprised Van Madanhi in the last round and he finished with 5.5 points. Meanwhile Vitalis Mapuranga defeated the former Zim Open Champion Zhemba Jemusse in a pulsating round seven game which left some onlookers shell-shocked. Tayengwa Tinodaishe Seke 4 High School was the best scholar with 5.5 points followed by Makomborero Garamukanwa of Highfield 2 High School. The tournament was proudly sponsored by Crystal Candy and Kasparov Chess Foundation who made it possible that there were some guaranteed prizes for the tournament. The Chief Arbiter for the tournament was International Master Simbarashe Murimi while the Deputy Chief Arbiter was Fide Arbiter, National Instructor Victor Chimbamu, National Arbiters Jarmil Ndoro, F. Chiweshe and Magret Ngugama helped in the running of the tournament.

Woman Fide Master Refiloe Mudodo won the ladies section of the Zimbabwe Open with 7/8 points. The form two scholar also got the best scholar prize as she won the Open section and was entitled to the prize. She only lost to Tatenda Zengeni in the tournament. Mashane Mary defeated Tatenda in the tourney to cut her lead in the section which she failed to contain after drawing her final round game against Panashe Zimbili of Bindura who was also the second best scholar in this ladies section. She missed a winning combination against the much fencied Tatenda Zengeni who is calm on the board.

The game that pitted WFM Refiloe Mudodo and Woman Candidate Master Rumbidzai Mawire was very tactical the Smith Morrah gambit which trapped a Queen early in the opening leading to the resignation of the latter player. This section was very interesting as it pitted the two Zambian ladies who were denied the first position by the young Zimbabwean players who clobbered them. Tatenda Zengeni came second closely behind the winner just half a point adrift. Third position went to Linda Shaba and Zimbili Panashe who were tied on third position with 6 points, while veteran player Rhoda Masiyazi came fifth with 5.5 points out of 8 games played. WCM Rumbidzai Mawire, Mashane Mary, Pumuyo Bridget, WCM Makwena Christine all had five points and were tied on sixth position.

There was a five player tie on tenth position in the ladies section and these are Chitiza Evidence, Chipuka Faith, Murinda Anashe, Sithole Praise and Muponda Nyarai who all had 4.5 points. The youngest players in this section were Anotidaishe Madamombe and Nicole Chibvuri. The winners got some cash prizes and sweet hampers from Crystal Candy and Kasparov Chess Foundation injecting some USD cash prize money for the winners. Thirty –three players took part in the competition and this was a chess fiesta as it allowed the players to showcase their tactical prowess as well as retention in positions which were demanding and deep to convert for some it was very pleasurable as they remembered their lines very well. Some players played some very correct computer moves which ensured that there was no one who could carry the day by winning it on a silver platter but it real hard work. IM Bwalya said, ‘I played some tough opponents and only gained 2 Elos in this tournament after travelling all the way from Zambia.’

In the Madalas section, Shorai Ropi won the section with 7 points out of 8 games he played. He only lost one game. Dapetha Prince came second with 6 points out of eight games played, while Makomborero Ronald came third with 5.5 points, John Jokomo came fourth with five points. He defeated Ronald Makombore in the final round in a pulsating game. Armstrong Shonhiwa finished with 4.5 points followed by Nyaera Tonderai and Gweshe Moses who had 4 points. Madamombe Chenjerai, Mpambela Clive and Collen Tongoona all finished with 3.5 points followed by Admire Mawire who had 1.5 points in this section reviving the old memories of chess playing by the old guard. It was a lot of fun seeing these players having fun on the checked board. Eventually, eleven players took part instead of twelve. Kandawasvika Kudakwashe failed to turn up due to work commitments.

In the under 14 open section, Tanatswa Kufeni of Highfield 1 High school won the section with 6.5/7.  He drew a game a lost game! The player who missed the win is Laison Jasi who was a piece up but failed to take advantage of this material when he gave back the piece thinking that he was almost checkmating his opponent. Laison Jasi eventually came second with 6 points after drawing two of his games. The third position went to Katsamudanga Shaniel who had 5.5 points. The first placed player won $80 bond, while the second-placed won $50 and the third-placed won $30 bond. They also got some sweet hampers from Crystal Candy. The youngest player in the section was Jordan Gweshe who walked away $15 and sweet hampers, while the youngest girl player was Mangati Tariro who also walked away with a cash prize and a sweets hamper.