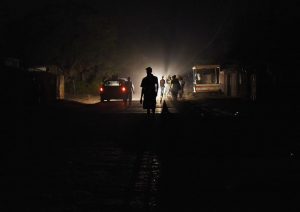 When the Zimbabwean government ordered internet service providers to shutter parts of the web in an effort to curb anti-government protests, it also plunged homes into darkness because people can’t pay their utilities online.

Most people in the southern African nation use Econet Wireless Zimbabwe Ltd.’s Ecocash mobile-phone payment system for daily transactions. They buy electricity in units of $5 or less and almost all domestic users are on prepaid meters, so many buy for $1 at a time.

According to Zimbabwe’s Finance Ministry less than 5 percent of commercial transactions in the country involve cash, mainly because it’s hard to find. Instead Zimbabweans use Ecocash or bank cards.

“Tonight will be spent in darkness,” said 42-year-old John Pedzesai, who sells plants on a sidewalk in the capital, Harare.

From: By Killing the Internet, Zimbabwe Kills Commerce and the Lights (Bloomberg)