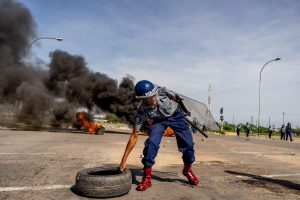 A police officer removes tyres set by protesters during a “stay-away” demonstration against the doubling of fuel prices on January 14, 2019 in Emakhandeni township, Bulawayo. (Photo by Zinyange AUNTONY / AFP)

We, as Civil Society Organisations from Zimbabwe under the banner of Crisis in Zimbabwe Coalition (CiZC) are encouraged by the AU High Level Consultation meeting of Heads of States and Governments on the situation in the Democratic Republic of Congo (DRC) to find a lasting solution to the post-election developments.

As your Excellences are discussing the DRC situation, we exhort you to take time to reflect on the fast deteriorating humanitarian and human rights situation in Zimbabwe following the call for a peaceful national stay-away from the 14th-16th of January 2019 in response to the social and economic deterioration.

Recalling that on the 30 October 2018, Zimbabwe Civil Society organisations under the leadership of Crisis in Zimbabwe Coalition met with the Chairperson of Southern African Development Community (SADC), His Excellency Hage Geingob at State House in Windhoek, Namibia and brought to his attention that:

a)    The political tension and economic meltdown, if left unresolved has a potential to cause regional, political and security instability;

b)    The unwarranted presence of the military in all spheres of the state, including public spaces and a glaring interference on the day to day duties of other authorities since the military intervention in 2017 was a threat to national stability;

c)    An inclusive national conversation with all players led by SADC on Zimbabwe’s future was needed;

d)    SADC must impress on Zimbabwe the imperative to return to civilian -military relations, to full compliance in modern state craft where the military is subordinate to state authority and does not interfere with civilian political processes;

e)    SADC community together with global players must institute discussions on Zimbabwe to address the deteriorating political and economic situation.

Post this meeting the situation has since deteriorated in Zimbabwe. The Zimbabwe state’s response to the national stay-away has been disproportionate marked by clampdown on fundamental rights and freedoms.  It is our considered view that the country might be sliding into a state of emergency. As of 16 January 2019, we are aware that of the following

·      Blackout on access to information through the suspension of internet services and restricted telephone communication across Zimbabwe, from Tuesday 15 January to date.

·      Zimbabweans conduct their daily financial transactions on mobile platforms due to the chronic cash shortages and these online payment platforms have been disrupted.

·      The unconstitutional deployment of the military forces in the country has resulted in use of live ammunition, wanton assaults, unlawful entering and breaking into people’s homes reminiscent of the extra judicial killings of 1stof August 2018.

·      Reports of arbitrary arrests, unlawful detentions and abductions of unarmed civilians and civil society leaders, including children below the age of 16 years.

As a result of these developments we are reliably informed that:

·      8 individuals have been killed during the violent crackdown

·      Hundreds of innocent civilians have sustained different injuries consistent with gunshot wounds and are failing to access health care facilities.

·      The right to freedom of movement has been restricted affecting the ability of ordinary Zimbabweans to sustain their livelihoods.

This might result in regional instability as Zimbabweans seek food, shelter and refugee in neighbouring countries.

We therefore call on the African Union to place Zimbabwe on the agenda of the consultation meeting on 17 January 2019 and deliberate on the situation to:

·      Act decisively by urgently and adequately intervening in the Zimbabwe situation;

·      Calling for withdrawal of the unconstitutional deployment of the military from conducting policing duties;

·      Call for the immediate restoration of Internet service provision across Zimbabwe;