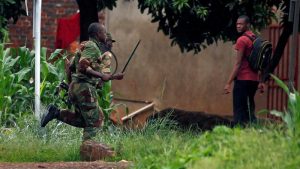 The soldiers claimed they were looking for son Rashid. As of now we do not have information on her whereabouts, and we are worried about her life.

We condemn this cowardly and barbaric act by the military which has mutated into a murderous army.

In the same vein, we demand her unconditional release, and all other missing persons that have been abducted around the country by the rogue security forces.

We further reiterate our call  to SADC, AU and the international community at large to urgently intervene in the deterioration of human rights and a humanitarian crisis in Zimbabwe.

Also of major concern is the continued criminalization of civil society work and the wanton threats of closing down institutions advocating for the supremacy of human rights and entrenchment of democratic processes.

We are aware of a bigger plot to target the Coalition’s leadership and its members and partners in the wake of increasing discontent among a cross section of stakeholders in Zimbabwe that include labour and business. CiZC, as part of its values and belief system upholds and encourages lawful and peaceful interaction between the state and its citizens in accordance with the Constitution.

Numerous articles and press briefings have appeared in state owned media (electronic, print and broadcast) issued by the government and senior officials accusing the Coalition of hosting numerous meetings whose purported agenda is to unseat the Mnangagwa administration.

The ruling party’s obsession with power has led to the militarization of the Zimbabwean state hence the deployment of armed soldiers on unarmed civilians.

We reiterate that threats and victimization of citizens will not solve the current national crisis, but that Zimbabwe needs an urgent inclusive national dialogue that seeks to reform national and local governance, restore legitimacy and arrest the economic crisis by strengthening social protection frameworks for ordinary citizens.