As ZCTU leaders is charged with subverting constitutionality govt 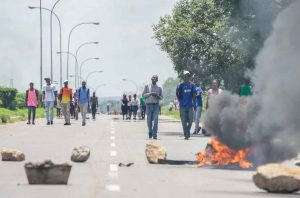 SEVERAL people arrested across the country for allegedly participating in last week’s anti-government protests have pleaded not guilty to charges of committing public violence and other offences levelled against them.

In Manicaland at Rusape Magistrates Court, three people namely Archford Chari, Leonard Rebanewako and Joe Nyasha Katope on Monday 21 January 2019 pleaded not guilty when they appeared before Provincial Magistrate Shane Kubonera facing charges of public violence as defined in section 36 of the Criminal Law (Codification and Reform) Act. The trio was arrested on Tuesday 15 January 2019 and charged after they allegedly placed some burning tyres on roads and erecting barricades on roads and tearing a billboard of President Emmerson Mnangagwa.

At Harare Magistrates Court, 13 Hatcliffe residents, who are represented by Andrew Makoni and Alec Muchadehama of ZLHR, pleaded not guilty to charges of committing public violence when their trial commenced on Tuesday 22 January 2019 with two State witnesses exonerating the accused persons of committing the alleged offence.

In Chitungwiza, the trial for two residents Takemore Bhunu and Godsave Mukore, who were arrested by ZRP officers and charged with public violence after they were accused of erecting barricades on roads, commenced on Wednesday 23 January 2019 while two other residents John Musona and Tatenda Antonio will stand trial on Thursday 24 January 2019. Another resident, Abraham Liyala’s trial commences on Monday 28 January 2019. All the residents are represented by Tinomuda Shoko and Idirashe Chikomba of ZLHR.

At Harare Magistrates Court, the verdict for the bail application for two residents Shadreck Asani and Daniel Shingirai, charged with public violence will be handed down today. The two are represented by Lizwe Jamela of ZLHR.

At Harare Magistrates Court, Japhet Moyo, the Secretary-General of the Zimbabwe Congress of Trade Unions was set to appear in court on Wednesday 23 January 2019 after he was arrested by ZRP officers and charged with subverting constitutional government for allegedly sending messages encouraging Zimbabweans to overthrow a constitutional government during last week’s shutdown protests. Moyo is represented by Alec Muchadehama, Bryant Elliot and Tinashe Mundawara of ZLHR.