The past few days have seen a surge in allegations of state sponsored rape cases. Some of the women who were interviewed were followed, brutalized and arrested. 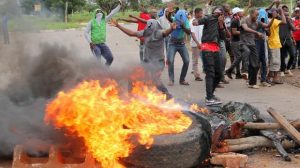 These point out to institutions of the state being turned rogue, creating a coalition against the citizen.

The MDC is disgusted by the use of rape as a weapon against women in an evil attempt to cower them from speaking out their discontent.

What kind of state rapes and sodomizes it’s people?

People who disappeared a few days ago, their bodies are being found deformed in mortuaries. The world must not watch while these violations continue. What is happening is already crimes against humanity by any definition and standard.

There is no mention of any investigation around these mass violations. With the numbers of reported violations including those attended to by NGOs and covered by the media, signs are that this can easily be a second Gukurahundi.

The madness must stop. This nation needs healing, its people need justice.