Zimbabwean soldiers are patrolling Harare as confrontations with demonstrators threaten to boil over amid protests over the country’s collapsing economy. 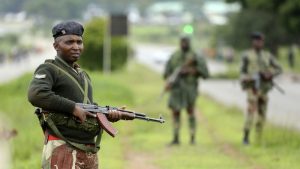 Soldiers patrol as protesters gather during a demonstration over the fuel price hikes in Zimbabwe. (Tsvangirayi Mukwazhi / AP)

Banks, schools and businesses stayed shut a day after the protests turned deadly.
Three people were killed during Monday’s unrest, which the government labelled acts of terror. Zimbabweans say the president has failed to live up to his pre-election promises of stimulating the economy.