At a time when many people in Zimbabwe wonder where their next meal is coming from and whether it is worthwhile taking someone to hospital for treatment, the House of Assembly has been preoccupied by more urgent matters: how they can improve their pay and conditions. 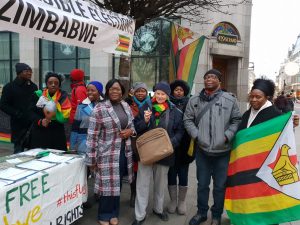 Star of the budget debate was Norton’s MP Temba Mliswa, who insisted that it was critical that legislators should have a three-course lunch if they were to function well: ‘We are talking about having a world class Parliament, but we only have a one course meal and the dessert is an apple and a banana yet when we go out to other areas we get trifle, a nice fruit salad, custard, ice cream and all that. But, look at what we get here — a mere banana and apple! There is no soup.’

Mliswa. an Independent, was greeted with applause from across the political divide when he complained that MPs did not have even a gym they could go to or a sports club. ‘So, how many more have to die before we rescue the situation. We must have a recreation club where we play golf or choose any sport that we want to partake in. We must be able to have world class gyms where we are able to train because when you are strong physically, mentally it equally helps you.’ Further, he said legislators should be given laptops or ipads.

There were also demands for an increase in allowances and credit cards for MPs when they travelled abroad and better cars. Finance Minister Ncube managed to get his budget passed when he promised parliamentarians Toyota Hilux twin-cab vehicles (see: https://zwnews.com/zim-mps-demand-3-course-meals-desserts-ipads-gym-cars-lots-of-cash/.)

There was hardly a dry eye in Zimbabwe after people learnt of the suffering of their legislators. ‘Let them play golf’, was the universal cry and ‘trifles are a human right’.

Perhaps, stomachs full, our MPs could turn their attention to the sad story of child brides reported in the UK newspaper the Guardian this week (see: https://www.theguardian.com/global-development/2019/jan/04/poverty-drives-trade-child-brides-zimbabwe).

The paper reports the case of Maureen, married off early because her parents were poor, pregnant at 13 and left after a still birth with obstetric fistula caused by prolonged labour. The paper explains: ‘Women and girls who experience obstetric fistula suffer constant incontinence, shame, social segregation and further health problems.’ “I haven’t forgiven my parents for doing this to me. I had a bright future but now they treat me like an outcast,” says Maureen. “When my parents told me about the marriage I couldn’t believe it, because they had always given me the impression that I was their most intelligent child and I would pursue my studies. The man was abusive, he called me names and beat me several times, especially after I lost my baby,” she says. “My dreams were destroyed by that man.”

The paper quotes another victim, Kresi: “I felt cheap and abused. My mates are in high school doing well for themselves. [My family] had no business selling me off. Now I have this condition which I cannot control. No one has even come to see me in this hospital,” she said tearfully.

Perhaps Zimbabwe’s legislators could offer these poor girls some trifle when they get back from their three-course lunch.

FOR THE RECORD: 30 signed the register.