A car drives past a seemingly endless queue of vehicles waiting for fuel in Harare. Some have no one in them. Then a presidential motorcade speeds past in the opposite direction. 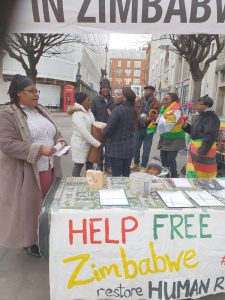 Take a look at the video recorded by the passing car (see: https://www.facebook.com/david.coltart/videos/10156194388327613/?eid=ARAbwh_ej8-_Va8y8_l9FuxplPC_OVvot4aYP_Tinp-tOs00buRKB3gYLOXZqdQRKrzlFXuEs_TFUarF). Does this show a Zimbabwe open for business? And can President Mnangagwa’s latest travels in a hired luxury airliner really deliver this business? Many people wouldn’t put Russia, Belarus, Azerbaijan and Kazakhstan at the top of any list except for corruption.

Mnangagwa will wind up his tour by dropping in at the annual Davos ‘movers and shakers’ party in Switzerland. He attracted some interest there last year as a kind of Christmas novelty popping out of the military cracker. But his trademark Zimbabwe scarf is now a bit bedraggled.

If he gets to see anyone but self-important rats they will ask what he has achieved in the past year, what he has done with the ‘influx’ of foreign investment continually hyped by the Herald.

They will acknowledge that his regime is less repressive than Mugabe’s but will be critical of his failure to restore monetary credibility. And they will wonder if anything different can ever be achieved by an irredeemably autocratic Zanu PF government . . .

But the Herald says salvation is at hand. It says a South African company has offered to invest more than $300 million in ‘waste management’ in Zimbabwe. A company spokesman said it wanted to ‘clean Zimbabwe’. Apparently the company had talks with Mnangagwa at the Davos forum last year. Our suspicions at the time have been confirmed: Mnangagwa really was talking rubbish at the meeting (see: https://www.herald.co.zw/sa-waste-management-firm-keen-to-invest-in-zim/).

A hundred years ago the poem ‘The Waste Land’ made the name of Nobel Laureate T S Elliot. He wrote: ‘I think we are in rats’ alley where the dead men lost their bones . . . Do you know nothing? Do you see nothing? Do you remember nothing?’

FOR THE RECORD: 9 signed the register.