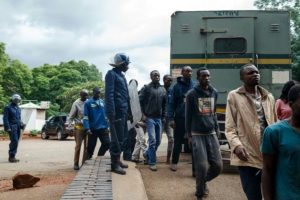 Zimbabwean anti-riot police forces watch men arrested during violent protests triggered by a sudden rise in fuel prices announced by Zimbabwean president, before their hearing at the Law Court in Harare on January 16, 2019. Picture: AFP/File/Jekesai NJIKIZANA

NINE people have been convicted for committing public violence after they allegedly participated in anti-government protests held a fortnight ago against the worsening economic crisis in Zimbabwe.
In Harare, six residents of Whitecliff high-density suburb were on Friday 25 January 2019 convicted by
Harare Magistrate Elijah Makomo for allegedly committing public violence during the shutdown protests.

In Mutare, Trymore Nyamaropa was on Friday 25 January 2019 convicted for allegedly obstructing traffic after he allegedly participated in an anti-government protest held in the eastern border city two weeks ago.

In Rusape, two people who include Achford Chari, were on Friday 25 January 2019 sentenced to serve
three years in jail after they were convicted for allegedly obstructing free movement of goods and vehicles during shutdown protests.

However, it was a different story in Harare, where 13 residents of Hatcliffe high-density suburb including MDC Alliance party councillor Elvis Ruzani, who were arrested and charged with public violence, were set free after Magistrate Elisha Singano acquitted them following the failure by State witnesses to implicate any of the accused persons in the commission of the crime. The 13 residents were represented by Andrew Makoni, Alec Muchadehama and Obey Shava of ZLHR.

At Harare Magistrates Court, Magistrate Edwin Marecha on Monday 28 January 2019 acquitted nine
residents of Mabvuku high-density suburb, who had been on trial on public violence charges after their
lawyers applied for discharge at the close of the State case.

In acquitting the Mabvuku high-density suburb residents, Magistrate Marecha agreed with the defence
lawyers namely Moses Nkomo and Kudzayi Kadzere of ZLHR that the State had failed to establish the
essential elements of the offence and that there was no evidence that any of the accused persons had
particpated in the anti-government demonstrations. In addition, Magistrate Marecha ruled that the evidence led by the State during trial was manifestly unreliable such that no reasonable court could act on it.

Harare Magistrate Victoria Mashamba on Monday 28 January 2019 also acquitted Munyaradzi
Kufahakutizwi, the MDC Alliance party councillor for Ward 19 in Mabvuku high desnity suburb at the close of the State case. Councillor Hakutizwi was represented by Tonderai Bhatasara of ZLHR.
In Marondera, 13 residents, who were arrested and charged with public violence, were on Monday 28
January 2019 acquitted at the close of the State case after their lawyer David Dhumbura of ZLHR applied for discharge. This left Dhumbura with only five residents facing trial.

At Marondera Magistrates Court, two other residents namely Tendai Leonard Chimwanengara and Elijah Machape, who were also charged with public violence and represented by Marufu Mandevere of ZLHR, were set free after they were discharged at the close of the State case, leaving Tinashe Nyamupepema on trial.

In Chitungwiza, Ketty Mamvura, who was arrested and charged with public violence, was released just
before trial commenced after the State conceded that there was no evidence linking her to the commission of the alleged offence. Mamvura was represented by Tinomuda Shoko and Idirashe Chikomba of ZLHR.

The seven ZCTU leaders namely President Peter Mutasa, Secretary-General Japhet Moyo, Benice
Maluleke, Prescilla Jonhi, Simon Mutasa, Munashe Chirovamari and Ezekiel Matema are on trial for
allegedly committing public violence as defined in section 37(1)(a) of the Criminal Law (Codification and Reform) Act for allegedly participating in a gathering with intent to promote public violence, breaches of peace or bigotry.

The unionists were arrested by Zimbabwe Republic Police (ZRP) officers on Thursday 11 October 2018
and charged with committing public violence after ZRP officers swooped on them in a pre-emptive strike to thwart an anti-government demonstration organised by the labour union to protest against government’s disastrous economic policies.