Access to social media platforms in Zimbabwe was reinstated on Monday, hours after a court deemed the government's internet shutdown illegal. 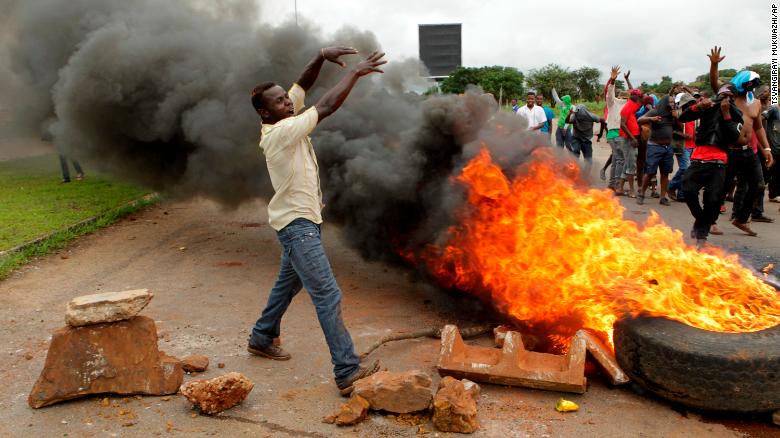 Authorities said they had blocked social platforms to prevent protesters from coordinating violence.

Harare, Zimbabwe (CNN)Access to social media platforms in Zimbabwe was reinstated on Monday, hours after a court deemed the government’s internet shutdown illegal.

Zimbabwean authorities clamped down on internet use last week, after violent protests broke out over President Emmerson Mnangagwa’s announcement of a 150% hike on fuel prices.
Over the weekend, internet access was restored only partially. A spokesperson for Mnangagwasaid social media remained blocked to prevent it being used as a tool for coordinating violence.
On Monday, Zimbabwe’s High Court ruled that the Security Minister Owen Ncube did not have the authority to force mobile operators to block services.
“It has become very clear that the minister has no authority to make the directive,” Judge Owen Tagu told the court. He commanded telecommunications firms “to unconditionally resume the provision of full and unrestricted services to all subscribers forthwith.”
Hours later, Zimbabwe’s largest telecommunications company, Econet Wireless, sent a message to its customers informing them the suspension had been lifted and that “all internet and social media services have now been fully restored.”
Zimbabweans had been relying on Virtual Private Networks (or VPNs) to access applications like Facebook, WhatsApp, Twitter and YouTube since last week.
Protests erupted after Mnangagwa said a price hike on gas prices was required to ease months of fuel shortages. The unrest has left at least five dead and a further 25 injured, with human rights organizations blaming the police and army for the violence. Security forces in Zimbabwe have accused “rogue elements” for stoking violence against protesters.
In the aftermath, residents and activists expressed concerns over the brutal crackdown.
Samm Farai Monro, a political activist for freedom of expression in Zimbabwe, told CNN that last week’s protests underscore how little Zimbabwe has changed since the resignation of former leader Robert Mugabe.
He described the protests as “an expression of citizens’ anger and frustration at an economy that is grinding to a halt. There are no jobs and people are struggling to survive with the cost of living in Zimbabwe with soaring inflation.”
“The repression that happened afterwards was really scary, with soldiers going around beating people door to door,” added Monro, who also goes by the moniker “Comrade Fatso Activist.” “Live ammunition being used on protestors and the subsequent internet blackout — this really affected our work as activists.”
“It goes to show that Mnangagwa’s government has been all PR and no substance. They say Zimbabwe’s open for business, but they shut down the internet. They say Zimbabwe is open for business, but they close any space for free expression and for citizens’ voices,” he said.
Precious Manenji, a resident in Kuwadzana, a suburb of Harare, told CNN that a group of men stormed her house last Tuesday looking for an opposition lawmaker.
“They arrived in many cars and started stoning our house and shouting,” Manenji said. “They were looking for an opposition councilor who lives a few doors away.”
She said the group — including one individual in military uniform — destroyed her property before moving on. Manenji lodged a complaint with the police afterward, but was told there was nothing they could do. “I am just so afraid now,” she said. “I feel dead — just dead.”

Also on Monday, Japhet Moyo, the Zimbabwe Congress of Trade Unions secretary general, was arrested at Harare’s main airport on charges of subversion related to organizing last week’s protests. Moyo was not aware that he was wanted by the police, Tinashe Mundawarara of Zimbabwe Lawyers for Human Rights told CNN. The union was one of the main groups calling for a general strike over the fuel price hike.