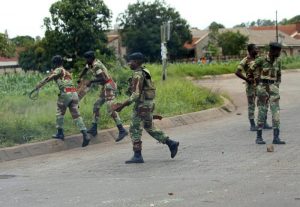 Soldiers patrolling streets in Zimbabwe amid civil unrest over a massive spike in fuel prices January 14-16, 2019
Image: PacheduZW via Twitter

Cognizant of the current socio-economic and political challenges Zimbabwe is facing, the National Association of Non-Governmental Organisations (NANGO), an official umbrella body of NGOs operating in Zimbabwe, convened membership meetings in the NANGO Northern, Western, Eastern, Midlands and Southern Regions on 21 to 23 January 2019.

Noting that the last 18 months have not been easy for the general citizenry who continued to experience cash, food and fuel shortages and an escalating cost of living amid suppressed salaries for the bulk of the labor force. This has undermined the propensity to progressively realize the socio-economic and political rights of the general citizenry.

Alive to the economic recession, coupled with governance deficit, impunity, social, economic and political exclusion that has seen the majority of the population particularly the marginalized susceptible to hunger, social dislocation of families, high levels of poverty, unemployment and underemployment, human rights violations as well as severe shrinking of NGOs’ operating space.

NANGO is concerned and notes that intra and inter political party violence and discord is escalating at the expense of national development. This further results in disenfranchisement of the already marginalized communities. This comes amid incessant corruption in government, poor service delivery, decline in health care and education systems and the general contempt for the rule of law by the military and the police.

Desirous to see Zimbabwe emerging from the economic, social and political doldrums and adhering to the fundamental principles, norms and ethos that entrench the drive to a common and shared vision for the nation which is critical for the attainment of sustainable development.

NANGO reaffirms the need to adhere to section 59 of the Constitution. When demonstrating citizens should not infringe on other people’s rights and demonstrations should be done in a peaceful and non-violent manner.

In this vein, NANGO condemns the looting, theft and vandalism of property and assets that was done during the demonstration and encourages the general citizenry to shun such practices as they are detrimental to both the agenda and spirit of demonstration and ultimately cause untold economic destruction.

We condemn lawlessness and human rights abuses and demand return to rule of law and constitutionalism.

We further, condemn all forms of overt and covert violence perpetrated by the state on citizens and by citizens on other citizens and demand all community and political leaders to foster peace and inculcate a culture of tolerance.

In the context of protecting the rights of children, we note with great concern the abuse of children that was rife during the protests we therefore condemn the incarceration, beating and unprocedural handling of minors in the justice delivery system.

We deplore the use of live ammunition on civilians as the right to life is enshrined in the national constitution, regional and international instruments.

We strongly condemn wanton attacks and abductions of civilians and demand an immediate end to abuses and that security of the citizens is ensured.

We condemn the clampdown on NGOs and any threats on leaders of civil society organisations by government officials and state security officers. Acting within the provisions of the constitution NGOs should be left to serve communities as well as advance peace and development.

We note with concern the unwarranted internet shutdown that was experienced across the country and urge the government that this should not be repeated in future as it constitutes a gross violation of human rights. Citizens should at all times enjoy their freedom to access information

In pursuit of a Zimbabwe people want, which is characterized by rapid and sustainable economic, social and political development underpinned by the rule of law, constitutionalism and unity, NANGO proffers the following recommendations for consideration:

NANGO reiterates that, NGOs in Zimbabwe adhere to their mandates in accordance with the Private Voluntary Organisations Act section 10 and other instruments within which they were constituted and they contribute positively to national development. Non-state actors strongly feel that the continued labelling and heavy handedness by the state is compromising development and will further marginalize vulnerable groups and communities. Therefore, all organs of the state are implored to desist from willy-nilly labelling any organized or non-organized mass protests and also cease threatening the security of civil society leaders.

NANGO is a non-party political, non-profit making organisation and non-denominational official coordinating body of NGOs in Zimbabwe with a membership complement of over a thousand organisations. It carries under its wings an amalgam of various issue constituencies and representative groups all with the singular focus of meeting the development needs of men, women and children in Zimbabwe.