An update letter from Ben Freeth, our Executive Director in Zimbabwe 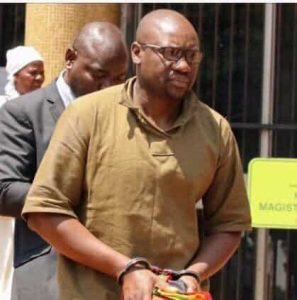 I write on the fifth day of the shutdown in Zimbabwe with still no Internet access, although it has come
on intermittently. As a result, it is difficult to ascertain the extent of the atrocities taking place all around
us.

I spent the entire day yesterday at the Rotten Road Magistrates’ Court with members of the press,
church leaders and concerned citizens, waiting for Pastor Evan Mawarire, initiator of the peaceful
#ThisFlag social media campaign, to appear. He was arrested by the police at his home on 16 January.
In court, the State added the charge of ‘subversion of a constitutional government by unconstitutional
means’, which is a serious offence. The only evidence referred to by the State was a video that Pastor
Mawarire put out on social media immediately after President Emmerson Mnangagwa, flanked by his
vice president, General Constantino Chiwenga, announced a more than 150% fuel price increase. The
video called for people to stay at home in protest, but specifically for no violence.

Having waited all day, the case only began at 5.30pm. Beatrice Mtetwa, a leading human rights lawyer who has been internationally recognised for her defence of journalists and press freedom – and who
has herself been beaten up by the police while on trumped-up charges – has been representing Pastor
Mawarire.

Ms Mtetwa stated in court that she had a copy of the video and the transcript, if the State was not
able to produce it. The prosecutor admitted that he had not seen the video, even though this was the
only evidence being led by him.

The prosecutor then complained that if the case was to go on any longer, he would have to go home
in the dark. He asked the magistrate rather to remand the accused pastor in custody so that they
could continue the case the next day.

The magistrate complied with the prosecutor’s request and Pastor Mawarire was led off to the police
cells.

The entire case was a charade. I could not help feeling that a country without honourable judges who
have the conviction to deliver justice – because they fear their political masters – is a country that is
doomed. We hope and pray that justice returns to Zimbabwe.

It is deeply concerning that right now, despite the international coverage of the events unfolding in
Zimbabwe, police and army personnel are continuing to go door-to-door in the high density suburbs,
breaking down doors and beating up people. I have heard of people hiding in ceilings and trunks to
save themselves from being beaten by soldiers and police.

Workers who are attempting to get to work have been stopped by the army and given the choice of
being beaten with sjamboks (heavy whips) or rolling in the mud.

I spoke to as many people as possible during the course of the day to find out what was happening on
the ground. In one instance, I was told that an entire family has been beaten, even children under the
age of 10 years.

It seems inconceivable that the invitation to President Mnangagwa to attend the World Economic Forum in Davos (22-25 January) should not be withdrawn while atrocities of this nature are taking place at
his watch.

Because the Internet has been shut down again, no bank cards are able to work and nobody has cash
because hard currency has been taken from private banks by the Reserve Bank for government use.
Shops are in some instances only allowing 10 people at a time to enter, fearing that their desperation
will lead to looting.

In Harare, some shops even managed to open yesterday but there is desperation because many people have no food in their homes and the staple food of mealie meal (corn meal) has already run out in
some outlets.

We have had reports of soldiers in civilian clothes encouraging looting in order to bring the situation to
where a state of emergency can be declared.

A feeling of utter hopelessness is descending on the nation. As Pastor Mawarire said yesterday, “I am
very, very disappointed.” When we talked about it, our disappointment was in the President, the government, the justice system and the entire State clampdown which has spread deep fear yet again
across the country.

Zimbabwe became an independent nation in 1980. Just three years later, the notorious Gukurahundi
massacres began, during which between 20,000 and 30,000 men, women and children are estimated
to have been murdered. They were initiated by the then Prime Minister Robert Mugabe, when Mr
Mnangagwa was Minister of State Security. The objective was to eliminate the opposition and generate the fear that would control the people. Fear and the subversion of justice have been two key
mechanisms that have enabled the ruling ZANU PF elite to remain in power for 39 years.

It is clear that with the injustices and brutality that have been perpetrated for so long by the system,
with Mr Mnangagwa having been a key enforcer throughout, fear has been the key instrument for control.
And since Mugabe was forced to step down in November 2017, nothing has changed in this regard.
We thank so much those who responded to our plea for funds and for prayer, we appreciate it very
much indeed.

We continue to ask for your prayers as we face this time of escalating fear, uncertainty and anguish.