The MDC Youth Assembly has received news from our security personnel at Morgan Tsvangirai house that the party Headquarters was set on fire by armed individuals riding unmarked vehicles. 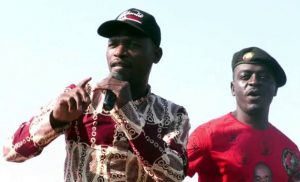 This is not the first time that Zanu PF has deployed it’s militia to bring down our party building.

The MDC YA position is very clear, citizens have a right to demonstrate peacefully as enshrined in section 59 of the Zimbabwean constitution.

We note with concern that the Mnangagwa government, whenever it is faced with citizens’ concerns it apportions blame on the MDC.

As a social democratic party whose values are freedom, justice and solidarity, we will stand in solidarity with the people and we will not shy away from that revolutionary task bestowed on our shoulders.

We however, want to warn Zanu PF youths that our silence does not mean weakness, neither does exercising restraint mean we cannot defend ourselves.

Be warned! Do not provoke us!

We remain unshaken,firm and resolute.