Opposition figures are in hiding as arrests and beatings continue. But the anger at Mnangagwa’s regime persists 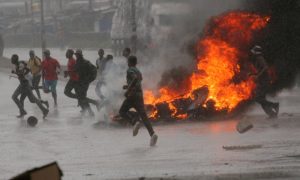 Protesters set up barricades in Harare on 14 January after the price of fuel was doubled. Photograph: Philimon Bulawayo/Reuters

Activists and lawyers in Zimbabwe fear that the brutal crackdown by security forces will continue “for the foreseeable future” as authorities seek to crush all possible opposition to the ruling Zanu-PF party.

Hundreds of activists and opposition officials remain in hiding this weekend after almost two weeks of arbitrary arrests, beatings, rapes and abductions committed by police and military in the poor southern African country.

The crackdown followed an outbreak of rioting and looting during a shutdown called by union leaders to protest a hike in fuel prices. So far 12 people have been killed, many more injured and between 700 and 1,500 detained.

“This is not going to be over quickly. We have seen that the state have just notched up the level of oppression and that is the level they are going to be operating at for the foreseeable future,” said Doug Coltart, a human rights lawyer in Harare.

The abuses are the worst seen in Zimbabwe for at least a decade and have dashed any remaining hopes that the ousting of autocratic ruler Robert Mugabe in November 2017 would lead to significant political reform.

One veteran activist described the crackdown as likely to become “the new normal”.

“This is going to go on for weeks, months, however long it takes for the authorities to feel sure they have made certain that there’s no real opposition left,” the activist, who requested anonymity, said.

Around 20 arrests were reported on Friday and Saturday across the country, as well as scattered incidents of assault. Police appeared to be targeting poor vendors and taxi drivers.

Hundreds of opposition activists are currently in hiding, or have fled overseas.

“They are not just trying to arrest me, they are trying to kill me,” said Ishmael Kawzani, a former independent candidate in local elections, who has fled his home in Kuwadzana, a poor neighbourhood on the outskirts of Harare, the capital, which has seen repeated army dragnets in recent days.

Jacob Mafume, an MDC spokesperson, said the five members of parliament, 10 councillors and more than 200 members of the party had been detained.

At least six people have been charged with subversion – an unprecedented number – and so face prison sentences of up to 20 years. They include four trade union officials, an MDC parliamentarian and a well-known social media activist.

“There is a kind of messaging here. They are saying: ‘We can go for your leaders, so we can go for anyone. They are saying to Zimbabweans we don’t care who you are,” said Alec Muchadehama, a lawyer representing Peter Mutasa, a senior trade union leader charged with subversion.

There are also concerns about mass trials of up to 60 men and women accused of participating in riots and looting.

This suggests that basic commodities such as food, fuel and medicine will remain both scarce and increasingly expensive, making further protests likely.

Authorities have defended the crackdown as a necessary measure to restore order.

Labour activists and unions are considering further protests in coming weeks. Teachers have been among the most vocal advocates of further direct action to force concessions from the government over pay and conditions. However, the detention of several leaders of teachers’ unions has made mobilisation harder, officials said.

On Friday the powerful Apex council, which combined dozens of civil service unions, said it would not accept the latest government offers of increased allowances and might move towards industrial action.

“The unions are cautiously moving towards the front line but they will want to move with a collective position. These guys are in an invidious position because they still need to earn and protests would contribute [to] a further erosion in government services,” said Piers Pigou, a South Africa-based expert with the International Crisis Group.

Lawyers are also meeting to consider their strategy in the face of the crackdown, and may demonstrate during the coming days week.

“After the sheer brutality of the last two weeks, the population has been cowed into submission. Lawyers have that layer of protection that might allow them to march, though being beaten up or shot is still possible,” said Coltart.