British diplomacy on Zimbabwe came in for a mauling in a parliamentary debate this week and there were demands to suspend any re-engagement with the Mnangagwa government, oppose Zimbabwe being readmitted to the Commonwealth and seek intervention by international organisations such as the UN, AU and SADC to get soldiers withdrawn to barracks. 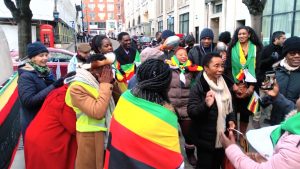 The debate, attended by Africa Minister Harriett Baldwin, was led by the Chair of the All-Party Parliamentary Group on Zimbabwe, Kate Hoey, who said there was no doubt that the British Embassy in Harare had become too identified with Zanu PF.

She asked: ‘Will the Minister confirm that Her Majesty’s Government, and particularly the Foreign and Commonwealth Office, have learnt a lesson from what I would call the ill-advised cosying-up to the Zimbabwean leadership, which owed its position, power and loyalty to the military and political machine that manoeuvred to install it and not to the people of Zimbabwe through a free and fair electoral process? I will not go into more detail; the Minister knows what I am talking about. There is no doubt that our embassy in Zimbabwe had become too identified, rightly or wrongly—I think wrongly—with ZANU PF.’

Ms Hoey went on: ‘I want to make sure that the Minister realises that those of us who urged caution, particularly Zimbabweans who have long had to cope with the machinations of ZANU PF brutality and the manipulation of international opinion, were rebuffed by some officials in our embassy who thought that they knew better. I hope that we have learnt that lesson.’

A former Africa Minister James Dudderidge acknowledged that he had in the past accused Kate Hoey of being ‘a bit pessimistic’: ‘Sadly, again, she has been proved right and a realist about the situation.’

Ms Hoey opened the debate saying: ‘The systematic abuse and actual torture of individuals continues as we speak. The women who have been raped by soldiers have nowhere to report these crimes, because the rule of law in Zimbabwe has broken down.’

She continued: ‘People were too afraid to move around, because of the burning of vehicles. They knew that many of the soldiers were doing this, but not in uniform. The Zimbabwean Government had the audacity to think that people would believe their story that these people had gone to army barracks or police stations, stolen the uniforms and then taken part in this activity. Of course, that was complete nonsense.

‘I could go on for a long time about all the terrible things that have happened, but there is no doubt that Mnangagwa knew what was going on. Whatever he has said about what he will do, nothing has happened—none of the responsible people have been prosecuted. For me, one of the most dangerous things is how the constitution is being completely ignored and the level to which the rule of law has been trampled on by the executive, the army, the police, the national prosecuting authority and some elements of the judiciary.’

Summing up the debate was an MP of the Scottish National Party, Peter Grant, who said the international community must intervene. He spoke of numerous allegations of women being gang-raped by uniformed soldiers.

‘The changing response from the authorities is notable and revealing. Initially, as always happens in such cases, they tried to deny anything had happened. They denied that there had been violence and said that such violence as there was had somehow been the responsibility of the protestors. Then they admitted that the police and army had used force, but claimed that it had been proportionate. A Government spokesman told the BBC, “When things get out of hand, a bit of firmness is needed”. It was only when there was incontrovertible video evidence that could not be claimed to be fake, making it clear that police and army officers were involved in assaults, that the authorities finally accepted it had been happening. Chillingly, the President’s own spokesperson said the crackdown was “just a foretaste of things to come”.’

The Africa Minister said the response of the security forces to the protests against the petrol price rise had been disproportionate and reminiscent of the darkest days of the Mugabe regime. President Mnangagwa must act to stop the abuses.