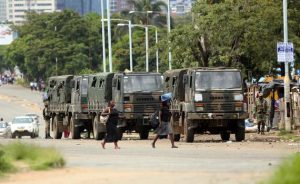 A British MP has expressed her horror at reports of Zimbabwean women being raped by soldiers during a violent crackdown on protesters. Picture: AP Photo/Tsvangirayi Mukwazhi

Crisis in Zimbabwe Coalition (CiZC) welcomes calls for national dialogue as a way of resolving the multi faceted crisis bedeviling the country.

It is CiZC’s long held view that following the disputed July 30, 2018 elections, a national dialogue was critical in resolving the Zimbabwean crisis.

We reiterate that a national dialogue, in its nature, should be inclusive and not necessarily be a political dialogue among political parties.

In this briefing, we highlight our concerns over the Zimbabwean issue as well as our expectations from the national dialogue process;

1)      It is our conviction that the national dialogue process must involve all stakeholders and a national visioning process that has civil society, government, political parties, business, religious groups and labour unions among other critical stakeholders. The dialogue process should produce a clearly timed roadmap to the demilitarisation of civilian political processes and the restoration of normalcy by focusing on key political, economic and social reforms. In this regard, we call for FULL CONSULTATION of civic society rather than cosmetic processes.

2)      It is imperative to arrest the economic downturn in Zimbabwe based on a clear reform roadmap and implementation of pro-poor and inclusive economic policies. Efforts at economic transformation, stabilisation and growth should be aimed at achieving inclusive sustainable economic growth and development.

3)      The Government of Zimbabwe must uphold and guarantee citizens’ rights as enshrined in the Zimbabwean Constitution and other regional and international human rights treaties and statutes. Full implementation of the country’s constitution is equally imporatant in promoting democracy in Zimbabwe.

4)      The Government of Zimbabwe must respect the fundamental right of access to information, freedom of expression as well as freedom of association.

5)      There is need to immediately operationalise a comprehensive programme on national healing, reconciliation and nation building that will depolarise society and entrench the respect for diversity, inclusion and tolerance in all facets of life.

6)      The army must desist from partisan politics and confide themselves to the barracks. There is an imperative need to de-militarise the Zimbabwean state.

7)      There is need for non-interference into the work of institutions that support democracy. This again calls for full implementation and respect of the country’s constitution. Also, government must not be seen to be criminalising the work of civic society orgaisations.