Zimbabwe on the brink as violations intensify 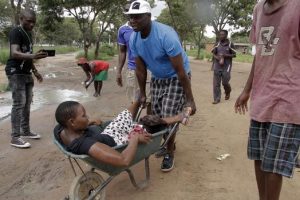 A woman with a gunshot wound in the leg sustained during clashes between protesters and police, is transported in wheelbarrow to a medical facility. Picture: ANA / Facebook

Introduction
The National Transitional Justice Working Group (NTJWG) is shocked at the horrific developments of the past weeks. We hereby raise the RED FLAG that, unless urgent measures are taken, we may be on the brink, if not already, of MASSIVE CRIMES AGAINST HUMANITY as the military and the police continue with violations against the civilian population, opposition activists and civil society leaders since the 14 January 2019 fuel protests.In the wake of the fuel riots that followed the increase in fuel prices, a ‘de-facto’ state of emergency has been imposed on the country, suspending fundamental freedoms and the rule of law. This campaign included unleashing the security forces, shutting down the internet and targeted arrests and detentions without following due process.

A sustained campaign of human rights violations targeted at civilian populations across the country has led to many deaths, displacements, torture and assault of hundreds. Human rights organisations recently reported allegations of rape against over 15 women in Epworth, Hopley and Bulawayo.

With the return of President Emmerson Mnangagwa, some had hoped he would rein in the situation but this does not seem to be the case, raising fears that the government has no capacity to rein in the security forces.

Gross Violation of Human Rights
It is over two weeks since the violations began on 14 January 2019. There are credible reports of numerous human rights abuses being perpetrated against civilians, regardless of whether or not they participated in the protests. This occurs in the, context of multiple random home invasions and beatings. People sleeping in their homes are being pursued by the military, the police and ZANU PF militia, and fished out of their homes, women raped and men tortured.  Children as young as nine years are being targeted for torture and assault.

Human rights doctors who have been treating the wounded are now in hiding as the state is hunting them down for treating victims of military and police brutality.

Victims are not even safe when receiving medical care.  On 21 January 2019, the soldiers stormed a private medical facility where 28 victims of military brutality were receiving treatment and further assaulted and arrested them.

Leaders of civil society organisations are being attacked, their homes being raided and their families being held as ransom to force the activists to surrender.

The level of human suffering that the military, the police and ZANU PF militia have perpetrated on the people of Zimbabwe in the past weeks is of shocking magnitude and can never find justification in any civilised society. Human rights organisations have reported that at least 16 people have been confirmed dead. Dozens more are missing, hundreds are nursing wounds from gunshots, dog bites, assaults and torture.  The evidence of these crimes, captured in both video, still images, and witness testimonies induces a sense of shock in all right thinking people and must never be tolerated in world that swore never again to the Rwandan Genocide.

Over 600 people have been arrested in dragnet arrests while many are held incommunicado detentions at military establishments and other illegal places of detention. More shocking are the credible reports of rape by the soldiers across the country which have plunged the nation into deep sorrow and suffering.

The Law Society of Zimbabwe has raised alarm regarding what appears to be the judiciary’s unwillingness to hear bail applications, taking away the right to a free trial for hundreds of people arrested. This has led to lawyers taking to the street in protest at the breakdown in the rule of law.

In an action, later declared by the High Court to be illegal, the government went to the extent of ordering the internet companies to shutdown internet services. This took away from the whole nation the freedom of expression, freedom of the media and access to information as enshrined in section 61 and 62 of the Constitution of Zimbabwe, as well as the ability for civil society to coordinate emergence response for persons under attack from the state.

Crimes Against Humanity
We have no doubt that the violations documented so far are an enormous underestimate, and the scale will only be understood in coming weeks when victims are able to seek assistance. The Human Rights Commission, which found that the police and the military had perpetrated torture against civilians, has now become the target of the state attack.

It is also of the greatest concern that the government has not followed the Constitution in formally declaring a state of emergency and deploying the military. It is probable that the military have been unconstitutionally deployed.

The situation warrants immediate intervention by the international community to ensure that perpetrators are held accountable.

A Historical and Yet Continuing Threat Against Humanity
What makes our concern very real and frightening is the realisation that Zimbabwe has been on this road before.  Remember Gukurahundi, 1982 to 1987 when the 5th Brigade killed over 20 000 people in the Midlands and Matebeleland regions.  In  Operation Murambatsvina in 2005, 700 000 people were displaced and their homes destroyed by the state.  The atrocities in Chiadzwa diamond fields, Operation Makavhotera Papi, Operation Hakudzokwi, and most recently the August 1, 2018 extra judicial killings, are all indicators of the ready application of violence by the state.

Hardly a month since the Montlanthe Commission released a report condemning the military in Zimbabwe for killing civilians on 1 August 2018, these crimes are upon us again, albeit with rejuvenated ferocity and demonic ruthlessness. This is evidence that left to our own domestic means, there will never be an end to these atrocities with no accountability.  We are concerned that further violence may occur, as evidenced by the statements issued by the President Emmerson Mnangagwa’s own spokesperson, who said these crimes committed in the past week are just but a taste of what is to come.  The Prosecutor General, who is expected to independently investigate and prosecute crimes has been quoted in the press, without any investigation, saying that the military did not kill a single person.

There are credible reports that militia groups have started setting up torture bases around the country in the style that recalls the horrors of past elections, and especially 2008, when over 200 people were killed within a space of 30 days. There is no credible evidence that the state, or the military, have shown any willingness to control the violence.

There is a real danger that  the human rights defenders that have been assisting victims will not be able to offer the support necessary to the vulnerable civilians who are the target of the Government of Zimbabwe because many of them are already in hiding owing to the systematic attacks by the state.

There is need for action. The world must condemn and stop the atrocities taking place in Zimbabwe. We would argue that a critical threshold has been reached. The current events strongly suggest that crimes against humanity have been committed: the violations are widespread, systematic and in pursuance of a political objective, and demand both investigation and accountability.

There can be no substitute for accountability.  International law provides many avenues for ensuring accountability for crimes against humanity, as well taking preventive measures to avoid deterioration. Dialogue alone without accountability is not sufficient as history has proven that the perpetrators in Zimbabwe are ready to commit these crimes again and again. Statements by government leaders show a commitment to violence that is shocking and must be met with a sustained response from the world community that swore never again to such genocidal crimes against civilian populations.