Thomas Merton was a New Zealander born in France, who was educated in England and lived his life as monk in America. 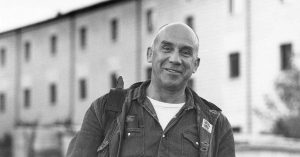 People who choose to be monks desire to withdraw from the world and search for God in silence and contemplation. There are a number of monasteries in Africa where men and women follow this way of life.   But Merton’s was not a hidden life; he became widely known because of his writings and his pursuit of racial justice and peace.  He opposed the arms race and all wars, especially in Viet Nam in the 1960s.

What struck people at the time was the personal way in which he described his search for God and his attraction to the Catholic Church which eventually led him into a monastery.  He lost his mother when he was six and moved house and country constantly as his father’s work took him from place to place. He was still a teenager when his father died and he set out to explore the meaning of life using whatever help he could get. He spent a wild year at an English university in which he fathered a child but at about the same time he began to discover the action of God’s grace in his life.

He has been compared to Augustine of Hippo (modern day Tunisia) who also lived a wild directionless youth but who also powerfully felt the inrush of grace in his life which he describes in his Confessions. Both men came to discover that freedom, touched by divine mercy, released their energies into highly creative ways. ‘Mercy’ is the word we use for the power to channel a person’s confused longings into something creative and positive.  We associate the word with God but a parent, a teacher, any kind of counsellor or friend can show mercy to another. It is the most beautiful quality of ‘e-ducat-ion’, leading a person out of dark confusion into the clarity of daylight.

In the Old Testament description of the rivalry between Saul and David there is a moment when David has the king in his mercy.  All he has to do was pierce him through with his lance.  But David restrains himself.  After all, Saul is ‘the Lord’s anointed’.  David showed mercy but it was a mercy based on fear and calculation. ‘If I kill him now what will be the consequences?  Better to wait!’

The mercy of Jesus is unconditional. There is no such calculating. ‘Love your enemies!’ Full stop!  ‘Lend without any hope of return’. ‘Give and there will be gifts for you; a full measure, pressed down, shaken together and running over.’ The images pour out. This kind of mercy or compassion will change the world.  It will drive out fear.  It will create new people who will not be afraid to use their gifts and energies to create a better world. This is where mercy touches freedom.  This is what Thomas Merton and Augustine experienced.  It is available for everyone.  It can change our world.