MDC is by far the biggest and most successful political opposition party in Zimbabwe, and I used to believe strongly that it would be the answer to Zimbabwe’s problems if only it could gain power. 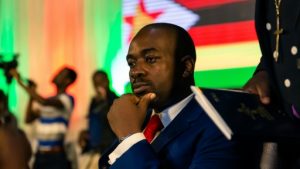 But now, MDC itself has destroyed that belief. The experience of how it has handled things ever since the concourt hearing in which it challenged the legitimacy of the recent elections and ED’s presidency proves conclusively that it is far too incompetent to be able to run a country effectively.

First, I want to make it clear that MDC’s leaders and supporters are brave, courageous people. No one can fault their determination, and at least they have the courage to stick their necks out and suffer the consequences when far too many of the population are not. And they do not give in. For these things, they must be applauded.

But having courage, a determination to succeed and the refusal to give in are not enough. You also must, if you REALLY want to succeed, go about things in the right way. And then you must be COMPETENT in how you carry out your plan. And this MDC is clearly not.
The cracks in MDC’s competence first became apparent during the concourt case wherein it challenged the honesty of the election and the legitimacy of ED to be President of Zimbabwe.

This was a hearing in which MDC should have had a clear open-and-shut case. Now let’s be honest, we all know there was no way the Establishment was going to allow MDC to win its case no matter how well it presented it or how “irrefutable” was the evidence it put forward in support. Nevertheless, this was an absolutely golden opportunity for the MDC to prove both to Zimbabweans and the wider world that the finding of the court was an absolutely obvious travesty of justice, brought in contravention of all the evidence.

But, actually, it proved the complete opposite. In a stroke of genius, the government decided to allow the whole court proceedings to be broadcast “live” on television to the whole world. And what the world saw was MDC floundering in a case so badly prepared and presented that the judges did not have to be corrupt to reject it. They simply followed the evidence to arrive at a verdict that, strictly according to the evidence, was actually correct. MDC handed its failure to the court on a platter. And the international community saw Zimbabwe’s biggest opposition party exposed for what it was: amateurish and incompetent.

And if a political opposition party cannot even run what should have been a simple open-and-shut court case, how can it be competent enough to run a country?

Since then, the MDC has continued to prove it is an incompetent opposition. For instance, it childishly insists on calling Chamisa “President” when, quite clearly, he is not. Love or hate ED, question his legitimacy or not, even his bitterest enemies accept that he is the recognised and appointed President of Zimbabwe, and will remain so until someone manages to dethrone him. The MDC’s behaviour in this regard flies in the face of reality, is as I said childish and sounds like sour grapes.

The MDC’s actions since ED took power also prove it has no idea about how mount a serious challenge to him or to ZANU PF. In fact, it is far more likely that attempts within ZANU PF will unseat ED (just as they unseated Mugabe before him) than that MDC will do the job.

It also has not done its homework. The history of all other nations that have overcome brutal, repressive regimes proves there is only ONE way to replace them. And it is NOT armed revolution (which MDC does not advocate anyway) because that usually only replaces one oppressive government with another, often even more oppressive than the one it replaced. Zimbabwe’s so-called War of Independence proves this, as does EVERY other violent attempt in Africa’s other 53 nations to remove their oppressive governments.

Nor are elections the way to remove dictatorial regimes because they just ride roughshod over them. I’m not saying elections never have worked against these regimes because occasionally they have. But it can take decades to create change in this way, just as we have seen in Zimbabwe, 39 years and counting – and even longer in SA and most other African countries. And they generally only work anyway when a corrupt regime has weakened itself with internal conflicts.

But if you really want to get rid of a dictatorship (which in effect is what Zimbabwe is), history has proved time and again that there is a way that, properly led and organised, can remove a dictatorship and restore a proper working democracy literally in a matter of WEEKS, not the years or decades that elections take.

So why has MDC not implemented it? Why has it not employed a tactic that, had it used it effectively, would have removed ZANU PF and got MDC into power decades ago? Because it is too incompetent or too stupid to do the obvious, which is to LEARN how virtually all other nations got rid of their corrupt repressive governments, and then apply that in Zimbabwe.

Instead, it plugs away at the same old, same old tactic of fighting elections which it should have realised many years ago is simply a waste of time, and plays into the hands of the incumbent dictator. Because dictators know that if it comes to an election, they will win every time by fair means or (usually) foul.

Every time an election looms, everyone knows it will be rigged. Newspapers and social media are full of it. The MDC (and other opposition parties) call for regulation to ensure a fair and honest election, knowing full well that the government will take no notice. And every time it fights again in a battle that, surely, anyone with a modicum of intelligence, must realise it can never win. Yet every few years, it repeats the same process, and gets the same result.

The MDC also fails to understand the basic facts of a dictatorial government. First of all, it is not the natural state of a government to be a democratic body. EVERY government in EVERY nation in the world will soon become tyrannical if its citizens let it. The only reason genuine (as opposed to fake) democracies exist is because the governments of those nations know their own citizens will not tolerate it if they try to repress them.

So it is ridiculous to blame ZANU PF if it has simply reverted to the natural state of what EVERY government will become if its citizens let it. And the biggest political representative of the Zimbabwean people is MDC, so it must take full blame for allowing ZANU PF to exist in the first place. And the MDC has only let that happen because it has no idea about how to stop it.

Second, MDC behaves as if ZANU PF is motivated by the same desires as everyone else, which is a desire to see a free citizenry and a strong economy leading to a prosperous population. So what does MDC do? It keeps criticising the government for what it is not doing, or what it is doing wrong. And it keeps telling it what it should be doing.

But doesn’t the MDC realise that ZANU PF has a totally different agenda? That its aim in life is to enrich itself at the expense of Zimbabwe and its citizens? That Zimbabwe is there to benefit ZANU PF, and ZANU PF is NOT there to benefit the nation?

And doesn’t the MDC realise that, according to ZANU PF’s own agenda, ZANU PF is actually doing a thundering good job? Its leaders have made themselves immensely rich and powerful, and will continue to do so until someone uses a totally different approach to remove them.

So doesn’t MDC realise that the government is not interested in what it sees as MDC’s petty little complaints? Its whining, moaning, complaining pathetic press releases and public utterances that have no more effect than a flea on an elephant?

In fact, doesn’t MDC realise that ZANU PF, like all tyrannies, actually WELCOMES verbal and written criticism, because it knows very well that while its opponents are TALKING and COMPLAINING, they are not taking HARD, CONCRETE ACTION to remove their oppressor. In fact, letters to the press and public addresses are a safety valve that serve a useful purpose to a dictator – they allow a disaffected citizenry to let off steam which, if driven underground, could easily lead to revolution.

The MDC keeps calling upon the AU and SADC to act. Why? Is it not aware that both the AU and SADC are controlled by the largely corrupt, oppressive governments that govern almost every African nation? So why waste valuable time and effort on appealing to them? Is it to make it look as if MDC is doing something? If so, organisations only resort to that when they have run out of ideas as to what to do next.

Change in the AU and SADC will only come when the governments that control their decisions become more oriented to helping their citizens rather than themselves, and not before.

Finally, it is horrifying to see MDC indulging in fake news. One expects this of oppressive governments, but for anyone else to do it calls into question how honest and incorrupt MDC actually is. Some Zimbabweans for a while have been expressing concerns about the truth of MDC’s public statements. But these have usually been on matters difficult to prove one way or the other. However, the recent press releases claiming that the government was to introduce a new currency this week and blaming it for keeping silent about the trapped miners at Battlefields were easily dispelled as lies. Where the miners are concerned, the government had already declared it to be a disaster, and miners on the ground had already remarked on a large number of relief workers in attendance.

A party that is prone to lying to cover up its own inability to take effective action has no right to get power.

To repeat, MDC’s leaders are brave, courageous and determined. But, really, political leaders need to learn their craft otherwise they have no right to lead political parties. And being a successful political leader does not consist of going out on a wing and a prayer. It consists of KNOWLEDGE and UNDERSTANDING of the situation, and then creating and implementing a WORKABLE plan – in other words, one that will actually WORK – not one that depends on hopes or wishes.