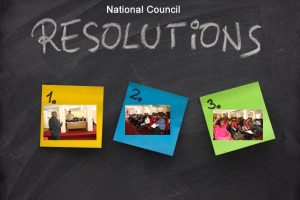 1.1 Noting the calculated and deliberate State-sponsored assault on the party leadership, party structures and ordinary Zimbabweans including the elected MDC members, the national council unreservedly condemns the sustained and needless brutality and the attempt to decimate the party and to intimidate the ordinary citizenry.

1.2 Noting the economic challenges, the humanitarian situation, the huge levels of unemployment in the country, the breakdown of social services, the poverty facing the people and the devaluation of the people’s salaries and the clueless monetary policy statement announced by the Reserve bank of Zimbabwe early this week, the national council calls for the promotion and strengthening of the multi-currency regime and that alternatively, the country joins the Rand monetary union to alleviate the dire plight of the people.

1.3 Council notes with concern and condemns four commanding heights of high-level corruption by State actors in the fields of foreign exchange, fuel, command agriculture and mining.

1.4 Council commiserates with the bereaved families who lost their loved ones in the Battlefields mining disaster. Council notes with concern the half-hearted and inadequate attempts by the State to deal with this particular disaster and all national disasters in general. The council notes that the State’s measures of intervention were grossly inadequate considering that the government has adequate resources to charter expensive jets for Mr. Mnangagwa and his cronies in government.

1.5 Council condemns the 2 percent tax levied on innocent Zimbabweans and the consequent poverty it has engendered among the people.

2.2 Council restates that the dialogue process must be properly and independently guaranteed and that the conditions must be conducive to genuine dialogue. Council notes that Zanu PF has a history of battering people so as to frog-march and coerce them to meaningless dialogue platforms. To this end, Council calls for the immediate cessation of all forms of brutality and harassment of the people and the MDC leadership so as to create a proper environment for a genuine and durable national conversation to take place.

2.3 Council notes the inter-party dialogue that is taking place through other spaces such as Parliament. Council takes the position that the dialogue cannot continue to take place before the preliminary meeting of the principals ie. President Advocate Nelson Chamisa and Mr. Emmerson Mnangagwa.

3.1 Consistent with the powers exercised by the party President in terms of Article 9.1.2.1 of the party Constitution, the National Council reaffirms the position that the 5th Congress of the MDC be held on 24-26 May 2019.

3.2 Consequent to the resolution above, the National Council hereby authorizes the party through the Organizing department to shorten the time-frames for the convening of the branch, ward, district and provincial Congresses from those stipulated in the party Constitution.

3.3 The National Council hereby authorizes the Secretary General to write the notification for the said Congress.

3.4 Council resolves that there be another extra-ordinary National Council meeting to deal with Congress issues including but not limited to the appointment of the Independent Commission to run the national Congress in line with the dictates of the Constitution.

3.5 That the National Organizing Department, forthwith present to the Standing Committee and the National Executive the template and timeframes for the Congress.

3.1 The party will be holding a mammoth occasion to celebrate its 20th anniversary this year. Council notes the long road the party has travelled as well as the successes and tribulations it has encountered along the way and intends to launch a book and a documentary that chronicles its tumultuous journey of service and sacrifice. The national Council resolves to hold the party’s 20th-anniversary celebrations on the 14th of September 2019 at a venue to be advised.

4.1 Council resolves to launch the Morgan Richard Tsvangirai School of ideology so as to inculcate the ideals and principles of social democracy, smart leadership and to infuse a culture of good governance across all strands of leadership and membership.

6.1 Council resolves that all its deployees to Parliament, council and to all its zones of autonomy must go back to the people regularly as well as holding regular feed-back rallies and meetings in line with the mass-line culture of the party.