The military government has removed any doubt of its cruelty and lack of remorse when its front man Emmerson Mnangagwa appeared in a disgusting interview of France24. 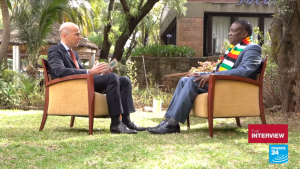 He displayed a clear misunderstanding of basics in Criminal Justice, he certainly does not qualify to lead Criminal Justice reform. Not surprising that the years he served as Minister of Justice were wasted. No laws were aligned to the constitution. Instead, he was at the centre of taking away progressive clauses through dubious amendments.

Just like his old days of Gukurahundi and the 1st of August killings, in the interview, Mnangagwa was in denial, lied with a straight face and said hollow statements.

Mnangagwa in 1983 professed ignorance about Gukurahundi “I have never witnessed that, I have never heard about it except to read it from the press. I have never heard any complaint of that nature. “ Yet reports including the Catholic Commission for Justice and Peace revealed that more than 20 000 people had been butchered by the ruthless, Korea-trained, 5th Brigade which, on record, he had briefed the press on the trainers.

Thousands of deaths later and decades later he has failed to at least pronounce a word of apology.

He has not apologized for the 1 August killings. Neither has he taken responsibility even after reading out a report which squarely finds him guilty.

In fact before the Mothlante Commission, he had confessed ignorance of deployment of the army.

The MDC finds his interview to be a continuation of his denial tactics, the kind which is unacceptable especially in a space relating to State sponsored deaths and rape. His desire to see where the deceased were buried is shocking when the funerals were even screened live on international news channels.

President Chamisa attended some of these funerals.

Postmortem results confirmed that the deceased had died of bullet wounds, others after sustaining fatal blows from the indiscriminate assaults on innocent citizens. The denial is a clear sign of arrogance, ruthlessness, cruelty- the very traits embedded in the Zanu PF DNA.
We also know that they are conflicted because evidence placed in court records by one of the killers is to the effect that Zanu PF had given guns to untrained thugs who killed people in cold blood.

The MDC also notes that Mnangagwa misunderstands the need to protect victims of rape.

His interview does not make it better, he trivializes the whole state instigated violence that took place in January, insisting that women were not raped because only one report was made to the police.

We in the MDC have argued then as we do now that only the Independent Complains Mechanism set out in section 210 of the Constitution has the lawful and reasonable grounding to investigate these issues.

Mnangagwa cannot keep hiding behind the so called regime change agenda statements of NGOs and the MDC when the Zimbabwe Human Rights Commission made factual findings on the violations.

It is a constitutional commission not an NGO

Mnangagwa is certainly bad for Zimbabwe. His leadership is in bad taste, his lying has reached astronomical levels and his arrogance keeps friend of Zimbabwe away.

Zimbabwe can only heal and move forward when the truth is told. We challenge Mnangagwa to do the honorable thing, and allow the will of the people to prevail.

Behold the New. Change that delivers