I am one of those business people who had their enterprises callously destroyed by marauding protestors, that rocked Zimbabwe between the 14th and 16th January 2019 - in which I lost property worth tens of thousands of United States Dollars. 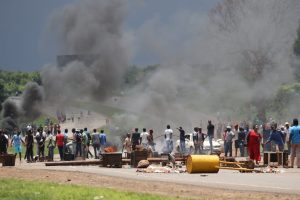 Without any insurance company covering loses due to such hooliganish destruction, I have had sleepless nights – and bouts of depression – as struggle to come to terms with my predicament, as well as whether I will ever be able to resurrect from such a catastrophe.

The nightmares associated with that day, when these marauding thugs stormed my business – whilst I was in my office – and either stole or brazenly destroyed the property, will forever haunt me.

I pray that someday, all those affected will have restitution, and we can revive our businesses, as we had invested everything in them.

Nontheless, what sends even worse chills down my spine is the ruthless crackdown on innocent people by the Emmerson Mnangagwa regime!

The brutality exhibited by Zimbabwe security forces gives me far more worse nightmares than the attacks on my business.

Whilst, indeed I lost my business and property worth tens of thousands of US dollars – nothing can ever justify the killing of mostly innocent people.

Agreed, perpetrators of this cruel violent destruction of our businesses, and other properties, should be brought to book – however, shooting people with live ammunition, going around residential areas raping and beating up those going about their lives, can never be justified.

In fact, I do not believe that losing one’s property – mere things – can justify the loss of life, as human life can never be compared to lifeless property.

That is the main reason I do not even own a gun as means to protect my business, as there can never be a good reason for me to kill anyone over my property.

To me, killing people over property is plain murder – worse than the theft itself.

The Mnangagwa regime should stop hiding its britality behind us – those whose businesses were attacked.

The truth is that ZANU PF is a murderous party, and they will justify their acts by any means.

I do not believe, even for a second, that thos tyrannical regime cares about our businesses at all – as witnesses by their internet shutdown during that time in January, that led to us (businesses) losing even more millions of UD dollars – maybe, even more than what was lost at the hands of those thugs.

The world should know that we – as business people, who enterprises were looted and destroyed – condemn in the strongest terms the Mnangagwa regime’s heartless murdering, raping, and beating up of people, most of who has absolutely nothing to do with the violent protest, as security forces went on a rampage in residential areas targetting innocent people.

As I said before, my business can never to worth people’s lives.

The Mnangagwa regime is merely hiding behind our plight to launch its own murderous tyrannical oppression of the people.

We were just a convenient excuse.I would not be surprised at all if these thugs who attacked our businesses were ZANU PF supporters sent by their party in a well-calculated scheme to crackdown of innocent people.

Some of us have very fresh memories of how this same regime massacred over 20,000 innocent men, women and children in the Matebeleland and Midlands provinces in the 1980s, under the pretext of fighting against dissidents – no more than 20 of them!

How did the ZANU PF regime justify killing over 20,000 people, just to fight against 20 dissidents?

As it turned out, these ‘dissidents’ were nothing but a ZANU PF created excuse to launch a genocide against the isiNdebele people.

So why would we not suspect the same modus operandi this time around, as witnessed by the brutal nature of the Mnangagwa regime against mostly innocent people, under the pretext of fighting those who looted and destroyed our businesses.

We honestly do not want to have the blood of innocent people on our hands, as a result of Mnangagwa’s security forces killing people in our name.

We never asked these security forces to kill and rape on our behalf.

The world should know the true nature of the Mnangagwa/ZANU PF regime – they will use any excuse to justify their britality and murderous nature – without the slightest hesitation in created  ‘false flag’ events.

I sincerely believe the violence of 14th to 16th January 2019 was a false flag operation – as ZANU PF was behind it.

As much as I lost so much, and might never revive my business die to the violence of 14th to 16th January – no matter who was truly behind it – nothing can never justify the brutal murder, rape, beating up of mostly innocent people who were going about their business in the residential areas.

Mnangagwa should stop trying to fool the world, as he nothing but a leader of a murderous regime that will do anything to kill and subjugate its own people.