As it stands, Zimbabwe is a fragile climate in which citizens are subjected to harsh police actions and the president has no short-term solutions - Anadolu Agency 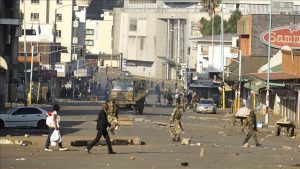 President Emmerson Mnangagwa’s 150-percent fuel hike announcement almost three weeks ago triggered protests, which followed brutal police measures. With his words taking immediate effect, the public took to the streets. This was not the hope envisioned for a post-Mugabe government. The unrest continues to escalate each day, and Mnangagwa finds himself increasingly positioned between a rock and a hard place.

The fuel price increase is not a sudden decision but one made after an economic bottleneck caused by a lack of resources left little room for maneuver. Inflation is no stranger to Zimbabwe’s currency, and bond notes could only temporarily hold the crumbling economic pillars. Although Finance Minister Mthuli Ncube has expressed the introduction of a new currency, there has been no substantial progress or clarity as to how much of a change this would bring.

The protests ensued as the police resorted to iron-fist tactics to establish some form of order. Zimbabwean-based independent journalist Frank Chikoware explained that violent nighttime police raids and summary daytime trials were exacerbating the security condition. Furthermore, arrests do not leave enough time for any proper defense to be made. This is combined with an increase in public melancholy over the political affairs and people see the democratic future of Zimbabwe rapidly turning into merely an optimist’s far-fetched dream.

“While Mnangagwa is trying to portray himself as a reformist, he is not walking the talk as he continues to target those with dissenting voices, especially pro-democracy campaigners,” said Chikowore.

Although the president brought a new ruling face in late 2017, it seems rather like a façade masking the old familiar oppressive force whose use of live ammunition had become the standard practice against protest rallies, and crackdowns on dissenting voices have become the terrifying norm.

After Mnangagwa’s failed attempt to convince Russia to invest, the Zimbabwean president had to cut short his foreign financial tour. In a Machiavellian tactical response, the president had to sacrifice investments to protect his rule. A monarchical ruler cannot spend too long outside his kingdom particularly if there is an ambitious opposition waiting for the opportunity to overthrow him. Although the opposition within the ruling Zimbabwe African National Union – Patriotic Front (ZANU-PF) remains minuscule and is at most only partially influential, in Zimbabwe’s delicate atmosphere, it takes but a moment to achieve a political outcome from chaos.

The UN Human Rights Commission has called for the Zimbabwean government to resort to negotiations rather than its current abusive action. The evasion of a dialogue approach is eroding the confidence of foreign investors, who favor stable socio-political climates. Nelson Chamisa, the leader of the opposition Movement for Democratic Change Alliance (MDC), has also been advocating for national dialogue but his calls have so far been to no avail. It seems unlikely for Mnangagwa to adopt a softer stance when using force sets him as the lion of his forest.

However, these ‘jungle cat strategies will just paw the political ball out of his reach’, as it were, unless he somehow manages to secure investment from Russia despite the lack of public approval from them. This grants Putin a more powerful position, rather than appearing as a simple savior who is trying to address his country’s economic woes. The other alternative is for Mnangagwa to appeal to the good relations he established with China during his vice presidency. If China were to decide to extend a helping hand, then Zimbabwe would have to sacrifice more than it wanted to bargain for. These options are not contingent on whether Mnangagwa has a positive global image or not. The art of the deal takes precedence here. Or it might as well take a president to achieve.

Mnangagwa’s announcements on deals with China and Russia have nothing real on the ground, according to Chikoware. It certainly raises the doubts as to whether the new foreign investments would ever reach people or be simply funneled into certain pockets in the process. Total internet shutdowns and a president appalled by televised police abuses give the impression of an almost oblivious leader, which does not bode well for his public credibility.

In addition, the presidency’s claim of innocence has lost credibility since it has pinned the military “misconduct” on Vice President Constantino Chiwenga for far too many times. The blame game depicts a weakness that Zimbabwe cannot afford to have at this time. It needs a clear direction with honest admissions on the country’s problems. However, transparency could reveal a president glued to Mugabe’s throne with the engravings of a past ruler’s calamitous economic policies still damaging a country attempting to recover.

As it stands, Zimbabwe is a fragile climate in which citizens are subjected to harsh police actions and the president has no short-term solutions. If Mnangagwa can initiate a dialogue, he will only find hesitation in his interlocutors because trust must be rebuilt. Using the police force may seem like a quick and easy solution for the president but such decisions will apparently lead to the repetition of what happened as a result of the previous regime’s systemic faults: a president eventually removed.

* Opinions expressed in this article are the author’s own and do not necessarily reflect the editorial policy of Anadolu Agency.