Under the Heading ‘‘ ‘Dead’ protestor in the dock” and in the NEWSDAY of 12 February 2019 titled ‘Army killings: ED demands evidence’ 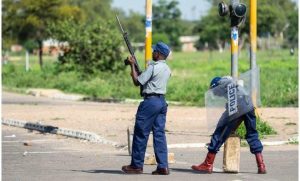 The Zimbabwe Human Rights NGO  Forum (the Forum) is outraged by the false allegations published in the Herald on the 13th of February 2019 alleging that the Forum falsified information in its documentation of the atrocities committed by the Government of Zimbabwe since 14 January 2019.

The article titled “‘Dead’ protestor in the dock” by Blessings Chidakwa suggests that the Forum and Amnesty International listed Tinashe Kaitano as one of the deceased in the recently released report ‘ On the Days of Darkness: An Updated Report on the Human Rights Violations Committed Between 14 January, 2019 to 5 February, 2019’.

On 12 February, 2019, NewsDay also reported in an article “Army Killings, ED Demands Evidence’ that the Forum reported the death of Tinashe Kaitano. The Forum wishes to highlight that the report On the Days of Darkness publication clearly states that the individual who is deceased from Kadoma is TM. These initials do not match those of Tinashe Kaitano. At no point did the Forum mention Tinashe Kaitano as one of the deceased killed by the Zimbabwe National Army and Zimbabwe Republic Police.

The Forum therefore demands a front page retraction and an apology from both the Herald and the Newsday of their articles that misrepresent our report.

In addition, the Forum affirms that the work of civil society in Zimbabwe is not criminal. It is legitimate especially in the face of a state that shows no respect for human life.  As was highlighted in our letter to the African Union, attacks against civil society do not only violate the African Charter but are also contrary to the spirit of the Cotonou Declaration on strengthening and expanding the protection of all Human Rights Defenders in Africa which speaks against the use of any measures, which aim at silencing human rights defenders and at preventing them from expressing themselves.

The Forum notes that extra-judicial killings documented, violated the right to life entrenched in Section 48 of the Constitution of Zimbabwe. The taking of lives of citizens cannot be used to further any political agenda, including the unwarranted targeting of civil society organizations. The Forum is concerned with the continued disregard of the right for human life by the Zimbabwe National Army and the Zimbabwe Republic Police and the failure to hold the perpetrators to account. The Forum therefore finds the inaccurate reporting by the media to be a grave disregard for the sanctity of life and or respect towards the families who are grieving the loss of their loved ones.

The Forum pays tribute to the many defenders of human rights who found themselves victims of state media because of their service in defence of life. These men and women are brave and must be honoured for their good work.