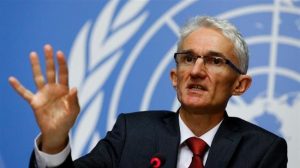 WHAT: Mission to Zimbabwe

During his visit, Mr. Lowcock will meet with senior Government officials, the diplomatic community, humanitarian organizations and members of civil society. Mr. Lowcock is also expected to meet with people in Epworth and Mudzi district, who have been affected the most by increasing food insecurity. Zimbabwe is facing rising humanitarian needs as a result of erratic rains and the economic challenges, with 5.3 million people estimated to be in urgent need of assistance.

Mr. Lowcock will also launch, with the UN Resident Coordinator, Mr. Bishow Parajuli, on behalf of the Humanitarian Country Team, the 2019 Zimbabwe Flash Appeal on 28 February 2019 in Harare. The Flash Appeal call on the international community to further contribute to the aid organizations’ efforts to save lives in response to Zimbabwe’s economic challenges and deteriorating humanitarian situations.

Prior to his leadership of DFID, Mr. Lowcock served as DFID’s Director General for Africa and Asia, coordinating its response to humanitarian emergencies in Haiti, Myanmar and Pakistan.

He served previously as Director General for both Policy and Corporate Performance, and as Director of Finance. Having served for extended periods in Kenya, Malawi and Zimbabwe, and with a subsequent designation as a Qualified Accountant, Mr. Lowcock brings a personal and analytical approach to humanitarian challenges.

His leadership of a large and complex public organization has provided critical experience for his work as the world’s chief humanitarian advocate. Mr. Lowcock holds a Master of Science in Economics from the University of London and a Bachelor of Arts in Economics and History from Oxford University.

The Under-Secretary-General and Emergency Relief Coordinator (USG/ERC) is responsible for the oversight of all emergencies requiring United Nations humanitarian assistance.