Lawyer and former education minister Dave Coltart has appealed to the world to take action to halt the Mnangagwa regime’s terror tactics against the opposition MDC. 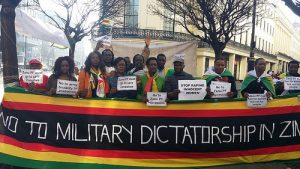 Senator Coltart was commenting on a statement by the MDC’s Manicaland spokesman Trevor Saruwaka, who said heavily armed soldiers had abducted two brothers who were MDC officials. One was Robert Saunyama, known as Jack Roberts, who was a parliamentary candidate in last year’s elections. The other was his younger brother Danmore Saunyama, a ward councillor.

The statement said about eight soldiers arrived in Zimunya Township in Mutare South in an unmarked Toyota double-cab truck. ‘They forced their entry into Jack’s house where he was hosting his brother who was visiting him with his wife and that of his other brother, Jericho. The soldiers started assaulting the wives of the three brothers and their children, together with Clr Danmore. All this while four soldiers were training their guns on Jack Roberts threatening to shoot him should he attempt to fight them. The victims of this barbaric military brutality bled profusely and suffered various degrees of injuries. The soldiers then bundled the two brothers and took them to an unknown destination.’

Saruwaka’s statement continued: ‘What is clear from this incident is that Zimbabwe is descending into a dark period of kidnappings, abductions, beatings, murders and extrajudicial killings. The dark days of Gukurahundi and 2008 run-off killings are upon us once again.’

Coltart said the modus operandi was identical to that used in those days: ‘relatively low ranking, unknown second or third tier leaders were then systematically abducted and disappeared. In that way the regime can decimate the structures of the opposition without too much negative publicity.’ Senior leaders who had ‘strong name recognition’ were dealt with more carefully by harassing them through the legal system.

‘It is time for the world to act. And those apologists of the regime need to make a decision – are they going to continue supporting this regime? If they do they will inevitably be tainted and become complicit themselves for the crimes against humanity being committed . . . We all have a duty to shout from the rooftops against these crimes; if we all don’t do this they will continue and indeed escalate.’  (See: https://www.facebook.com/david.coltart/posts/10156282468062613).

The army has of course dismissed allegations of systematic brutality by soldiers. It has announced it is to conduct countrywide door-to-door searches to look for army regalia allegedly used by rogue elements to commit crimes – a move dismissed by the MDC as a cover-up. Nelson Chamisa’s spokesman said: ‘They can’t expect us to believe that state security agents were robbed of their own uniforms. Even the government-controlled Herald reports: ‘Last week‚ a Harare man‚ Shepherd Magorimbo‚ admitted in court to terrorising residents while wearing a military uniform he got from the Zanu PF headquarters. “We were given the uniform at the party office‚” he told the Harare magistrate’s court.’ (See: https://www.heraldlive.co.za/news/world/2019-02-22-zim-army-targets-military-apparel-used-by-criminals/).