The lies around the Botswana credit line to the tune of $US 600 million is in bad taste, an insult against the citizen and bad for diplomacy. 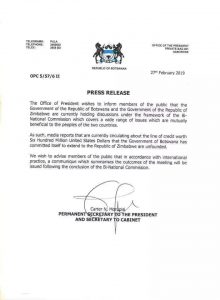 That the Botswana government had to generate communication from the highest office just to correct the lie shows the effect of such reckless behavior.

Lyssa, the Greek god of madness, has unleashed it’s angels of dementia and derangement in Zanu PF. There is shocking reinvention of spin in the military government, the lies and obsession of claiming progress are just too much.

For a government to invest so much personnel, money and time just to misinform the citizen is criminal. This is the reason why they now restrict the use of social media, they arrest journalists and deport ones from other countries.

They want to keep telling lies most of which have been embarrassingly refuted by people involved in the so-called mega deals.

They lied about securing 3 billion in Davos a year ago, lied about an Afrexim bank loan only for some clarification that only negotiations were taking place and they have also lied about oil deposits in Mashonaland Central.

The MDC contends that a responsible government must communicate accurately to its citizens. It is a basic obligation.