The Law and Order section has denied arresting Hon Joanna Mamombe who was abducted this morning in Nyanga while on parliamentary business. 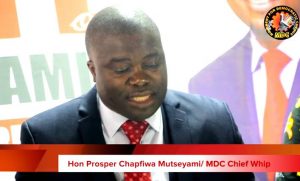 A team of about eight henchmen who snatched Hon Mamombe Boko Haram style claimed to be from police law and order section were driving a Toyota Fortuner registration number ACI 4582. Honorable Joanna Mamombe had been in Nyanga for Parliamentary business since the 24th of February.

This is a result of Zanu PF military polical settlement which has seen them create vigilante groups and vested powers of the state to these killer units resulting in deaths of at least 17 people in January and 7 others on 1 August 2018.

An Honorable Member has privileges they must enjoy whilst on parliamentary business.
While in Nyanga, suspected security officers visited Hon Mamombe’s parents home in Glenorah at midnight in search of her, harassing everyone and intruding into personal privacy of innocent people.

Yesterday, another arrest was effected on Hon Godfrey Sithole who surrendered himself to the police. He appears in court today.

The regime’s disdain towards upholding fundamental human rights is reflected in these barbaric acts. The manner the operation was done sends shivers down the spine of the ordinary civilians. It is a sad incident reflecting retrogression in our Constitutional Democracy against reform pretence by Mr Mnangagwa.

The MDC caucus strongly condemns the abduction and arrest of Hon Mamombe and Hon Sithole. When members of Parliament are harrassed and their rights violated in that manner it means the ordinary citizens are worse off. In general acts of torture, arbitrary arrests on trumped up charges, mass trials and conviction are of concern to the MDC caucus.

Our prayer is for the country to enjoy peace and harmony.

We will keep fighting for everyone to enjoy their fundamental rights as enshrined in our constitution.

Behold The New. Change That Delivers!