The country's estimated death toll is 98 and is expected to rise with many people still missing. 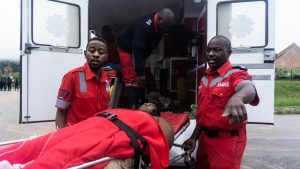 Chimanimani, Zimbabwe – High in the eastern hills of Zimbabwe rescue efforts continue and medical services are starting to reach some stranded communities.

Roads are slowly becoming more accessible and aid organisations are arriving to help to those in need in the wake of deadly Cyclone Idai.

In Chimanimani district, which borders Mozambique, critically injured villagers are being airlifted to hospitals. Tents for a temporary clinic and an aid camp have been set up in the mountainous section locally known as Skyline.

Chipo Liwayo and her six-month-old baby have bruises on their face that will forever remind them of what the storm took from them.

Liwayo lost two children when a rockfall and mudslide enveloped her home just beneath Skyline.

The children aged four and eight were swept away and are still missing.

“The rocks hit us as we tried to get out of the kitchen where we had run to hide, but my four-year-old child didn’t make it. The other one was already taken when the rains destroyed the bedroom where he slept. God has his ways, but I don’t know why this. It hurts,” Liwayo said as she cradled her only surviving child.

Her 77-year-old mother, Farai Muskwe, survived the rocks and mud but complained of a swollen leg and needs blood pressure pills that were swept away by the storms.

Farai Marume, emergency co-ordinator for NGO, Doctors without Borders (known by its French initials, MSF) told Al Jazeera that while medical rescue efforts had just begun, the agency had already received many injuries.

“The magnitude of this cyclone was huge. We have received a lot of patients with fractures and some others with more serious wounds.”

“We are making efforts but the major challenge is accessibility. We are working on that and trying to collaborate with our other partners to reach those in remote places.

“We’ve managed to send out medication to Chimanimani hospital via helicopter with the help of our partners,” he told Al Jazeera in an interview.

On the other side of the impassable mountain range lies Ngangu, a poor township in Chimanimani town where 40 victims of Cyclone Idai were buried on Monday according to the state-owned daily paper, The Herald.

It said the government had advised residents to go ahead with burials as there were no adequate mortuary facilities.

The news of the burials has unsettled those who are unable to reach their relatives stranded in other areas.

Witness Nyandoro, 36, a vendor in Chipinge town told Al Jazeera she was worried about her family in a village in Nyanyandzi area, about 85km further north.

“All the roads to my home area are bad, I can’t try going there, what if the cars cannot make it? I keep trying to phone but the numbers can’t get through so I don’t even know if my family is OK,” he said.

In a statement issued today, the spokesman for the UN Secretary-General Antonio Guterres expressed his sadness at the loss of life, destruction of property and displacement of millions by the cyclonic rains and subsequent flooding.

According to UN estimates 600,000 people in Mozambique and 900,000 in Malawi have been affected by Cyclone Idai.

Assessments in Zimbabwe are still ongoing, but the death toll continues to rise. The current estimate from the Ministry of Information is 98 dead, with many more still missing.

The UK’s International Development Secretary Penny Mordaunt has announced Britain will provide up to 6 million pounds ($7.96m) in humanitarian aid for Mozambique and Malawi.