The tropical Cyclone Idai which left a trail of regrettable destruction in Manicaland exposed the nefarious attitude of diamond companies operating the Eastern Region. 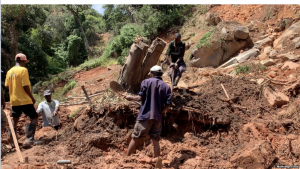 For so many times we heard that they are undertaking projects to assist communities. They must have mastered the art of misleading a nation. In as much as they may have done some development work, one has to be more analytical as to the quantum of their contribution towards cooperate social responsibility versus what they are getting from mining diamonds.

Although it was expected that the cyclone was going to hit Manicaland, it is the state of preparedness that leaves a lot to be desired. The approach by the state and diamond companies was rather too lackadaisical. For instance, some diamond mine workers in Chimanimani had to resort to staying on top of mountains without food or warm clothing due to flooding. ZIDAWU once indicated in their previous report that workers in Chimanimani were living in squalid conditions and it seems it fell on deaf ears. Accommodation crisis looms as Ngangu settlement was virtually swept away by the floods.

It remains a mystery why the Odzi Bridge in Chiadzwa has not been given a face-lift especially after carrying all the machinery and equipment of more than six companies that operated in Chiadzwa. This is the very bridge that claimed the life of Headman J. Chiadzwa some years ago following a head-on collision with an Anjin mine staff bus. Cyclone Idai nearly swept the Odzi Bridge thereby isolating Chiadzwa community from the rest of Manicaland for almost two days. This bridge was built before Zimbabwe’s independence and it was meant for a sizeable number of the then remote Bocha people.

Companies like Anjin, Mbada Diamonds, Jinan Mine, Kusena Diamonds, DMC and Marange Resources used this low lying narrow bridge to carry machinery and equipment worth millions of dollars. These are the companies that failed to remit any meaningful taxes to the treasury when they were operating. Former Finance Minister Hon Tendai Biti and subsequent ministers of finance complained about these companies not paying any royalties to state coffers.

It came not a surprise when Sakubva Marketing Stall in Mutare was swept by Cyclone Idai during the weekend. This is the project which many civic society organizations highlighted on the subject of tender procedures conducted by City of Mutare and Zimbabwe Consolidated Diamond Company (ZCDC). It maybe not be a shoddy job but surely they could have done better.

Recently ZCDC bragged about their ‘benevolence’ to Marange community. This included the 5 million Bond Dollars donated to Zimunya Marange Community Share Ownership Trust, 25 boreholes and repairing some schools and clinics. Although what they have done is commendable, it is the issue of prioritisation of projects that is a cause of concern. In most cases the intended beneficiaries complain of lack of consulted prior to the commencement of the projects.

As a way forward, companies should work closely with communities and stakeholders. This will lessen the rate of rejection of projects that are imposed on communities. No one should be left out in terms of socio-economic development as we are all partakers to national development. Diamond companies should not elbow out other stakeholders as they can assist in identifying priority areas to be attended.

The article was written by C. Sunguro.