The People’s President Adv.  Nelson Chamisa together with the MDC national leadership visited communities in Manicaland which were affected by cyclone Idai and assessed the damage, the needs of the survivors and the community. 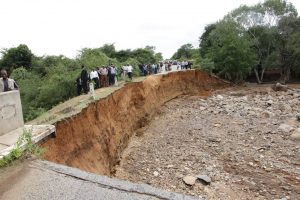 The Party established that:

1. Mutare – Chimanimani Road
President Chamisa saw the first barrier at Umvumvumvu bridge after Mhandarume before ‘Matsororo’. The bridge gave in to the heavy water flow, As such, it is no longer possible to reach Mutambara/Gonzoni or Lydia Chimonyo/Nedziwe by road.

2. Mutare to Chipinge Town
President Chamisa also assessed the Bridge along loop road through Tanganda Halt business centre which was swept away. He also took time to help a few police officers and villagers in the clean-up of Nyanyadzi bridge which was covered in debris.

Tanganda – Chipinge
The President and his team were blocked from accessing the road beyond Tanganda Halt turn-off as reports indicated that the road is giving in under the weight of heavy trucks.

3. Chipinge to Chimanimani
The MDC learnt that the road from Jopa turnoff to Skyline is passable past Silverstreams factory and a further 5km before getting to a point where the road is almost completely was washed away.  It’s dangerous to try to pass through what remains of that road

4. Chipinge to Copper/Kopa
There is not much information concerning this route for it is a dirt road, so chances are the road is not passable in this wet weather.

Both Rusitu and Nyahoda rivers were flooded so villagers at Kopa and beyond were not accessible as of yesterday.

Fatalities
The MDC continues to learn with disdain the death of close to one hundred people in the aftermath of Cyclone Idai. Sadly, the death toll is expected to rise, many people are still reported missing especially in Ngangu, Kopa and Kurwaisimba areas.

The President learnt of a nurse at Nyanyadzi hospital whose wife and four children were killed in this cyclone. The mortuary at the hospital had two unidentified bodies. It only has a capacity to carry three bodies.

Injured
Many people with figures ranging to as many as 80 are said to be require urgent medical attention in Chimanimani and Chipinge.

However, because of the nationwide challenge in our health sector, medical supplies need to improve significantly in light of cyclone Idai.

The MDC has also learnt that besides Chipinge and Chimanimani reports of damage were also received from Sakubva, Chikanga  Dangamvura – Federation, Mahalape, Gimboki, Odzi and Dora areas, Mutsamba and Chidzinzwa villages in Mutasa Central. Similarly, in Masvingo province, the effects of the cyclone have been reported.

President Chamisa witnessed the destruction of a classroom block at Devule Primary School, just three kilometers after the famous Birchenough Bridge. According to a member of the School Development Committee, repairs will cost the school $27 000.

Needs Assessment and Interventions
The MDC local government and devolution department has noted that the needs can be classified into two categories.

The urgent needs category and the short-medium term.

The MDC continues to appeal for food, potable water, clothing, blankets, sanitary ware, children’s clothing and the reconstruction of strategic bridges which connect the affected communities to the rest of the world.

In the short to medium term the MDC appeals for volunteers in the fields of civil engineering, rural and urban planners to volunteer their expertise and services towards rebuilding of these communities.

There is also need for psycho-social support and counselling for the traumatized as well as all affected by this cyclone.

We also hasten to make the point that supports for all volunteers is also key in respect of sustaining their stay in the affected communities as well as sustaining the efforts to rebuild the necessary infrastructure in the shortest possible times.

The MDC expresses gratitude to the response and goodwill expressed by Zimbabweans across the board in the past few days. We continue to receive assistance in kind, while we refer all monetary contributions to the nearest Red Cross offices, and other such credible platforms to ensure the intended beneficiaries receive your acts of goodwill.

The MDC calls on the international community to lend a hand and support efforts already in place.