From March 15 to 17, Cyclone Idai hit eastern Zimbabwe, killing more than 200 people and injuring many more. Chimanimani and Chipinge districts in Manicaland province were the hardest hit. There was extensive damage to infrastructure, including roads, bridges, water and electricity systems, and buildings. 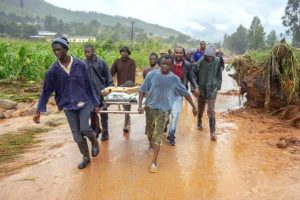 Markets have also been disrupted. Some households lost their food stocks, crops, livestock, and other property. Livelihoods in all cyclone-affected areas of Manicaland, Masvingo, and Mashonaland East provinces have been affected with immediate and long-term impacts on food security especially among poor households.

In areas not affected by Cyclone Idai, the drivers of food security remain the same as in the February Outlook. Crisis (IPC Phase 3) outcomes remain widespread due to poor macroeconomic conditions and the ongoing drought. Current and projected food security outcomes are expected to be similar to or worse than previously anticipated in areas affected by Cyclone Idai and the analysis will be updated in FEWS NET’s April Food Security Outlook Update.

Drought conditions persist in most parts of the country. This has increased the proportion of temporarily and permanently wilted crops, especially in the typically dry southern, eastern, western and extreme northern parts of the country. Crop production for the 2018/19 season is likely to be below average across all provinces, and significantly below average in typical deficit-production areas where a high proportion of households are expected to have no harvest.

Seasonal livelihood strategies continue to be constrained as a result of the poor seasonal rainfall and on-going macro-economic hardships. The green harvest which typically provides relief to poor households during this time of the year is not available across most parts of the country. Despite the presence of humanitarian assistance in most districts, food consumption for poor households remains poorer than normal across most of the country, due in large part to continued high and increasing prices of basic food commodities including maize grain and maize meal.