Former Tourism Minister Walter Mzembi used to be keen on what he called ’rebranding’ Zimbabwe. He could see that the country’s image abroad had been tainted by Mugabe’s misrule and thought cosmetic public relations would help bring in tourists. 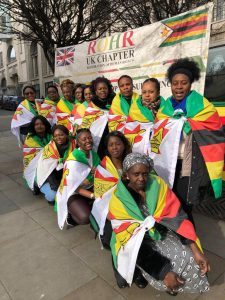 Mzembi is now on the run from corruption charges but his propaganda idea has been picked up by the Mnangagwa government which has decided to pay half a million dollars a year to an American Trump-supporting PR firm to try to persuade the US authorities that sanctions against Zimbabwe are not justified.

The Vigil was skeptical at the time about Mzembi’s rebranding efforts and we think that the money now being spent could more usefully buy drugs for hospital patients or fix the water supply in Harare, where some areas have been told that they will only have running water for one or two days a week, if that.

It is clear there are two divergent forces in the government: reformers and old school Zanu PF diehards. The mere fact that the government is still trotting out the tired Mugabe mantra of ‘illegal sanctions’ would seem to suggest that the blockheads are in charge.

Zimbabwean constitutional lawyer Fadzayi Mahere points out US sanctions could not be illegal as they were authorized by the American legislature. But the Zimbabwean government seems to have learned nothing from its failed legal challenge against the sanctions imposed by the European Union.

Former US Ambassador to Zimbabwe Bruce Wharton lamented that Zimbabwe had missed a great opportunity to move forward following the coup. ‘Hopes that Zimbabwe, through Mnangagwa, would be one of those rare examples of a military coup that restores democracy are slowly and methodically being dashed by a military not willing to allow change.’

A more positive attitude has been taken by reformers in the government. Finance Minister Mthuli Ncube has openly condemned Mugabe’s land reform programme, saying the cancellation of property rights and security of tenure had reduced land to a ‘dead asset’, giving farmers little access to loans. Furthermore, it appears that the misconceived indigenisation policy is to be binned.

Reformers received encouragement from an unlikely source, the Zanu PF Youth League. Its leader Pupurai Togarepi suggested Mugabe could be stripped of all honours bestowed on him during his time in office. ‘Can we walk on roads named after a person who destroyed the dreams and aspirations of a generation, these are questions that we need to discuss and debate.’ (See:https://www.dailynews.co.zw/articles/2019/03/05/zanu-pf-wants-mugabe-stripped-of-honours).

The Vigil thinks that rather than ‘rebranding’ Zimbabwe the government should ‘debrand’ it – perhaps starting by renaming the Robert Gabriel Mugabe International Airport.