Doctors are struggling to assist patients with absolutely no support from government, a cyclone is wreaking havoc in the Eastern parts of the country, old problems such as fuel shortages persist yet Mnangagwa flys out once more. 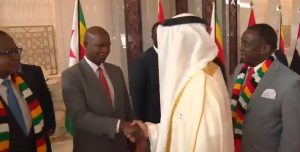 The MDC condemns this kind of behaviour. For someone to enjoy luxury trips on tax payer’s funds shows no respect or care for the citizen.

What kind of person deserts those he purports to lead?

What kind of person leaves behind dying children, sinking homes washed away bridges and goes on a dish sampling mission in the Middle East.

1. At the bare minimum, the cyclone should have been declared a National Disaster. This allows the unlocking of more resources to assist those in need. The reluctant approach adopted by government is a reflection of negligence.

2. The government must adequately inform citizens with the same intensity that Mnangagwa and his henchmen had when they sought election.

3. State intervention on disaster response should have kicked in by now, on a massive scale.

4. There is need to establish hotlines for those seeking help and constant updates. At the moment there is no line of communication.

5. In the medium to long term, the Civil protection unit has to be equipped to be responsive in times of disasters. At the present moment, it is not helpful to citizens – the Battlefields disaster also buttresses this fact.

6. In the meantime, the MDC calls for urgent assistance in the form of tents, food, blankets to the affected families specifically in the Eastern Highlands where houses have been washed away.

Zimbabweans are struggling, Mnangagwa has made it clear that the people’s struggles are not his struggles.

Foreign trips have gobbled a huge chunk of public funds with no return.

Hospitals have no painkillers, linen, blades and even gloves.

The obsession with talking to externals is not bearing any fruit because the fundamentals back at home are not there.

The MDC insists that globetrotting will not help, what is needed is genuine National dialogue to resolve the crises hitting Zimbabwe.