In Zimbabwe cyclones off the Mozambique coast are almost always bad news. Typically, our rainfall starts in November each year and runs through to March or April. 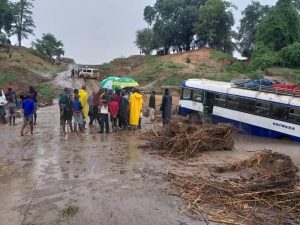 The rest of the year is dry and mild to hot. In the south of the country, our rains can come either from a southern system drifting across the continent from South Africa where the system constitutes the main wet season pattern. In the northern half of the country, we get our main rains from the “Inter-Tropical Convergence Zone” which forms each year and moves down from the north in November.

In a typical season, tropical depressions form in the Mozambique Channel or on the other side of Madagascar. These turn into cyclones if the water is warm and the right atmospheric conditions exist. One consequence of such events is that it drives the ITCZ north and often we get what locals call a “Botswana Upper High” which gives us beautiful weather that is the nightmare of every farmer.

This year just such a system has dominated our weather in February and well into March with the result that our crops have experienced dry conditions that are threatening wide swathes of the country with hunger this winter. There is little doubt now that our tobacco crop will be smaller than last year and we will have a grain and oilseed harvest that will be well below our needs. Many towns and cities are already under water restrictions.

But a week ago a deep tropical depression developed over the lower Zambezi valley and Malawi. This sucked all the atmospheric moisture out of the region and dumped it on a large area just north of the Zimbabwe border. The outcome was floods in Malawi and the lower Zambezi basin – they had to open the sluice gates at Cahora Bassa Dam and release millions of tonnes of water into the river below the dam. The system moved slowly down the river and out to sea and in the process rapidly grew into a full-blown cyclone – grade 4.

The cyclone then moved south down the Mozambique channel and drifted towards landfall at the Port of Beira – there it created havoc, a massive sea surge accompanies the system with winds up to 200 kilometres an hour. It smashed Port facilities and cut all communications with the rest of the country and its neighbour Zimbabwe. It moved over the coast at 10 kilometres an hour and dumped up to 700 mls of rain on the Eastern Highlands of Zimbabwe. The damage to infrastructure and crops will be immense and hundreds of thousands have been made homeless – even today we have no communications with Beira except by cell phone.

At the edge of the system when it disintegrated, Harare got 30 to 50 mls of rain and so did a significant area of the country – but farms to the West and South got little and remain drought stricken – so we have flood devastation and drought all in one small country. A cold front is approaching through South Africa and that might help in the south and west next week. Meanwhile today the deep depression that did so much damage to the lower Zambezi basin is back there doing even more damage.

As if not to be left out, Britain has slipped deeper and deeper into a morass of uncertainty over Brexit. When this was first mooted two years ago I said it would never work. The British economy is simply too dependent on its links with Europe, they cannot afford to “go it alone” without a special relationship with the Continent. I give Mrs May a prize for stubborn single mindlessness but she cannot escape the reality that Britain cannot go it alone into the future. If she does, she will be much diminished, no longer even driving force in its old Empire relationships with India a blooming superpower and Australia now making much of the running in the Commonwealth.

But the main enemy is none of these threats – physical or institutional, its uncertainty. We live in a world where the old certainties no longer apply. The United States no longer rules the world, the driving force of massive economic growth in the past 50 years, international trade and constant liberalisation and globalization, are all under threat. The social democratic consensus that has governed most European States in the past half-century and given Europe peace and prosperity, is no longer taken for granted.

Technological gains in almost every field are creating conditions where change is the only constant and the pace of these forces is now so fast that the kinds of jobs that have given billions security and a measure of prosperity are vanishing. The consequence is that the great majority of the world are living in a state of constant uncertainty about the future. This is the only explanation of the Yellow Jacket demonstrations in France and the growth of right-wing extremism in many countries and societies who had thought this sort of thing belonged to history books.

Everyone now knows that social cyclones are developing in almost every part of the world and that management of the outcome might well determine the future of the world in which we live. It is a scary thought.

Here in Zimbabwe, our situation is no less uncertain and confused. We have a new Government under Emmerson Mnangagwa and this has committed itself to a process of re-engagement with the outside world and to making the conditions needed for that a reality in the form of a program of political and economic reform. Both have made a confused and slow start but the achievements so far, are notable.

The new Government has embarked on far-reaching reforms to the political system, repressive legislation that has haunted us for over 70 years has been scrapped, reforms to our democracy give us some hope that the next elections will be free and fair. Our 2013 Constitution is being implemented, albeit slowly.

The Military Junta that has governed the country for the past two decades with a democratic façade dominated by a dictatorship under Mugabe has been substantially dissolved. New leadership appointed and significant downsizing and reform of the security services undertaken in a very short time.

On the economic front, if I was on the IMF Team responsible for Zimbabwe, I would regard our new Finance Minister as something of a miracle worker. He fixed our massive fiscal deficit in six weeks, he has followed a systematic and controlled programme of reform which has gradually liberalised our economy and has now floated our currency. Next will be a new monetary management system and a new local currency under sound control.

The latest measures have unlocked the very considerable potential in our export industries and I am certain that this will lead to strong growth in the near future associated with lower inflation and rising incomes after a period of painful adjustment and austerity. But it is not enough, we need to know where we are going and how we are going to get there. We need a strong social contract with labour and business and a clear vision of the future. In fact, I think that applies to virtually the whole world today.