The cyclone that devastated eastern Zimbabwe was predictable. What was also predictable was the failure of the government to prepare for it 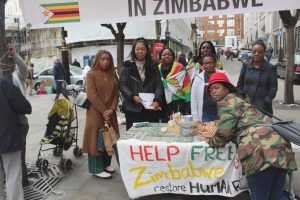 The cyclone that devastated eastern Zimbabwe was predictable. What was also predictable was the failure of the government to prepare for it. Everyone knew it was coming but nothing was done about it and it was not until it arrived that President Mnangagwa cut short yet another foreign trip for a brief visit home.

To make matters worse, the disaster victims in Chimanimani – one of the worst hit areas – desperate for aid, had to make do at first with Mnangagwa’s sofa. It gave them little comfort to see presidential guards unloading furniture from a helicopter instead of emergency supplies.

Of course, it is only right that the President – no doubt exhausted by his tireless travels – should have the comfort of his sofa when he consoled the bereaved and assured them that everything possible was being done for them. The question is, by whom? Aid distribution is said to have been put on hold until the President arrived and could hand it out – prompting fears that it is being politicized as usual.

The entire budget allocation for this year for the Civil Protection Unit amounted to a meagre $3 million. it could have got more had it not been for government profligacy in hiring expensive planes to take Mnangagwa on his manic travels – 28 trips abroad in the 15 months since he came to power. After announcing two days of mourning, he immediately departed for Angola to mark the anniversary of the Southern African Liberation Day – which most regional heads of state didn’t bother to attend.

Whatever the failures of the government, there can be no doubting the open-hearted response of the people of Zimbabwe to the disaster. People abroad have also responded generously. The British Ambassador Ms Melanie Robinson told the President that the UK had already committed $23 million to assist victims of cyclone Idai. ‘Here in Zimbabwe we have prepositioned equipment in Mutare so we have been able to respond very quickly and that is health equipment, medical supplies and some hygiene equipment and making sure that it gets to the people who really need it.’ Pity the Zimbabwean government didn’t do the same.