Mobile Operator Telecel Zimbabwe has donated groceries and clothing worth over $50 000 towards Cyclone Idai relief efforts. 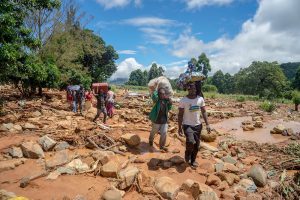 Moved by the loss of life, injuries and damage to infrastructure caused by Cyclone Idai, Telecel has set up a merchant code 217105 on telecash where Telecel subscribers can send cash donations. All they have to do is dial *888# and choose option 5 and then option 2 and then follow prompts.

As at 25 March, a total of $6 500 had been raised via Telecash. Telecel has matched the total individual donations made to this merchant code dollar for dollar thus raising a total of $13 000. Over and above the total $13 000 raised, Telecel Zimbabwe has added a further $7 000 culminating in a grand total of $20 000, which has been used to buy various groceries and other much needed relief items.

“I am greatly humbled by the spirit of togetherness shown by Telecel customers, staff and Zimbabwean citizens at large, who provided much needed assistance in cash and kind during this tragic period to victims of Cyclone Idai,” she said.

Telecel has set up collection centres at all its retail shops nationwide where to date 35 bales of clothing have been collected. Various commodities such as mealie-meal, cooking oil, sanitary wear and other groceries have also been donated by well-wishers.

The first batch of donations have been dispatched from the Telecel Head Office and sent to Chimanimani using a dedicated Telecel truck where the donated goods have been handed over to authorities coordinating the relief efforts in affected areas. Well-wishers can continue to send their donations to Telecel retail shops across the country or send cash donations via telecash to merchant code 217105.

Meanwhile, all Telecel base stations in areas affected by Cyclone Idai are now up and running, except for only two which are difficult to reach because of access roads that have been rendered inoperable. Efforts are being made by telecel engineers to refuel generators consistently and timeously for base stations that are currently not on the power grid to ensure consistent network availability for communications.

Emergency calls, made for free, to 112 using Telecel lines in all affected areas have now been re-directed to designated command centres to ensure that anyone in need of assistance gets the necessary help timeously.