The Zimbabwe Human Rights NGO Forum (the Forum) commiserates with all those who were affected by the disastrous effects of Cyclone Idai in Mozambique, Madagascar, Zimbabwe, and Malawi. 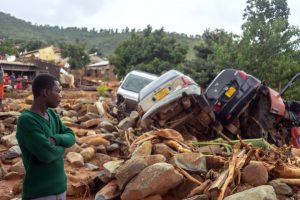 The tropical cyclone brought torrential rainfall on the eastern parts of Zimbabwe on 15 March 2019. The most affected areas are Bikita, Chimanimani, Chipinge, Chiredzi, Gutu, Buhera and Zaka.  In Mozambique, an estimated 600 people lost their lives as result of the cyclone induced floods. Zimbabwe has recorded at least 102 deaths, over 200 injuries and 250 people either missing or stranded. In total, an estimated 350 000 people were affected in the four countries.

The Forum joins the families across the region in mourning the loss of life, destruction of property and the general vulnerabilities that societies find themselves in. The real magnitude of this tragedy is still to be established. The Forum applauds the solidarity of the people of Zimbabwe who have shown the very depths of care and compassion for each other, in the true spirit of ubuntu.

These tragic events leave us torn apart and decimated as a people. They test our resilience. We do pray that the generosity of the human family across the world will give consolation to the affected families.

Constitutional Obligation to Protect Life
In difficult times, we do, as we must, find time to reflect on anything that we could do better to prevent or mitigate the effects of a tragedy of this nature. The right to life is enshrined in section 48 of our Constitution, hence creating an obligation upon us to take steps to ensure that we prevent loss of life.  A number of mechanisms exist for us to make use of to ensure that never againas a society should we allow each other to be left vulnerable to anything that threatens our rights. Such measures include putting in place ‘early warning early response’ systems. These must be action-oriented, looking not only on warning the people of pending disaster, but taking swift steps to remove people from the line of danger.

Lessons from the Past
Zimbabwe has been victim of natural and human-made disasters before.  The Tokwe-Mukosi Disaster is 2014 which made over 1500 families homeless.  The Tsholotsho Floods in 2016 and 2017 which affected over 36 districts in Matebeleland North.  The Battlefields mine collapse in February 2019 in which over 20 people died. Reflecting on these disasters and our response mechanisms leaves a lot to be desired for a society that must value human life.

The Tokwe-Mukosi and other successive disasters exposed the country’s lack of preparedness to handle disaster and assist victims. A study by the Civil Protection Unit (CPU) revealed that close to 2 % of Zimbabwe’s rural homesteads accounting for close to 30 000 homesteads are in extreme to high flood hazard areas. Following these findings, the CPU  developed the National Flood Plain Management Framework which, because of non-availability of resources was not fully implemented. The CPU has time and again complained that very little funds are allocated for disaster management. In 2016, they received $200 000. In 2017, it was reported that the funds had been increased from $200 000 to $2 700 000. The funds where however never disbursed and CPU has had to depend on well-wishers. With this background, it is not surprising, but must never be tolerated, that the Civil Protection Unit was not prepared to deal with the devastating effects of Cyclone Idai.

Call to the Government of Zimbabwe
We salute the generosity of the global community and dare challenge our own government to take full responsibility for the protection of all rights in the constitution, especially the right to life which time and again has been violated through natural and human actions. While donor assistance is welcome, it can never be the main source of funding for such critical institutions as the CPU. We cannot, as a country, outsource our own existence.