HARARE, ZIMBABWE — The United Nation’s Food and Agriculture Organization fears that an outbreak of fall armyworm in Zimbabwe will affect food security in a country where more than 5 million are already in need of food assistance. 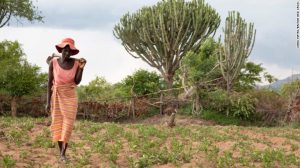 At Malvern Farm, about an hour drive northeast of Harare, Ntombizodwa Ncube is concerned by fall armyworms devouring the corn crop, despite efforts to contain the problem with chemicals for the third year running.

Peter Joseph Dzingami, a far manager in Goromonzi district, March 5, 2019, says that in the previous years farmers would control the fall armyworm. But this year, because there is not much rainfall, and the worms are hatching more than previous years and his harvest has been cut in half. Her co-manager, Peter Joseph Dzingami, is equally concerned.

“In the previous years, we would control it. But this year, no,” he said. “It is because there is not much rainfall, and the worms are hatching more than previous years. We were expecting 10 to 12 ton of harvest, but we now expect five to six ton (of corn). We have no idea where this worm is taking us to.”

Unesu Ushewokunze-Obatolu, the principal director in the Ministry of Agriculture, says the fall armyworm is one of many “transboundary outbreaks” Zimbabwe has been fighting over the past three years.

“The government’s approach to managing fall armyworm outbreaks has been to train extension officers and to raise awareness among farming stakeholders, to contain and manage HPAI and FAW (fall armyworm) outbreaks. Further, it sought to increase resilience and enhance productive capacity of smallholder farmers affected by the two scourges,” Ushewokunze-Obatolu said.

Judging from the two farmers’ testimonies, that program seems to have failed.

“We cannot actually eradicate (it), because what it does is, when we are in winter, it hibernates in the soil or probably mostly in the soil. And when you put up your green crops, that is where it feeds on it, then reoccurs so it will never eradicate,” he said. “But our role is that we mitigate the damage in the most effective and cost effective way.”

The fall armyworm, which attacks mainly corn, was first discovered in Brazil. Experts suspect that it moved to Africa when the continent imported corn from the United States in response to increased drought.

FAO is urging farmers to use “green methods” to control it. But farmers like Ncube and Dzingami say they hope for a permanent solution as soon as possible to ensure their future harvests are not affected.